One weakness of the traditional method of drawing from the top of the deck is that it leaves a large majority of the cards out of the running for selection. Although I trust the shuffle to bring the “right” cards to the top, I’m always looking for ways to enhance the credibility of the process. Some people deal with this challenge by pulling cards from random locations in a splayed “fan” of cards, but I think this defeats the whole purpose of shuffling. The idea is not to get a completely haphazard series of cards but rather one that has been subconsciously arranged “just so” for the reading; this is the objective of shuffling and cutting.

This “mixed-media” spread is my latest attempt to create more inclusion without sacrificing the benefit of the shuffle. It uses an array of 30 face-down cards and one six-sided die, which is rolled to select one card from each of five rows of six. Those cards are then read as a five-card line in the usual way to show the development of the matter. However, there are a couple of innovative twists that can be brought to bear on this straightforward approach.

Another difficulty I have with the modern practice of tarot divination is the rather promiscuous use of clarifying cards when stumped by the meaning of any card in a reading. Personally, I prefer to follow James Ricklef’s advice for dealing with them: “Let them simmer in your consciousness. They will eventually make sense. They always do.” This has served me well for decades, long before I read Ricklef’s book.  However I’m not averse to adding face-down cards to a spread that can be called upon when needed; the key is that they are set in place during the deal, not as an afterthought.

In this spread, each of the five cards is initially situated within a line of six, with at least one card before or after. The card(s) adjacent to it can suggest what the card was “up to” before being “plucked” for the five-card line. (Think about being chosen for jury duty; you had a life before and after.) This mini-narrative can be carried over into the card’s participation in the overall reading, showing whether it was harmoniously disposed or less happy with its lot. Furthermore, Elemental Dignities can be applied to the preliminary layout to indicate the degree of potency the card brings to the reading, which can then be loosely factored into the dignities between the final five cards. All of this is intended to add nuance or “shading” to the story. 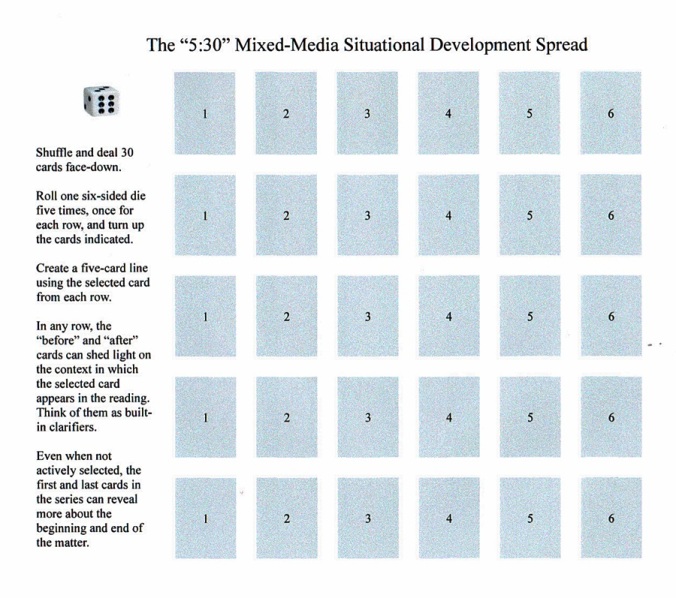