With the US government predicting the nationwide impact of the coronavirus pandemic to peak in the next seven to fourteen days, I decided to do a “best-case/worst-case scenario” reading using both the most pessimistic (Night Sun Tarot) and the most optimistic (Chrysalis Tarot) decks I own (if nothing else, the color palette of each tells the tale). I selected two opposing five-card lines as the format and applied reversals. In this spread the middle card in each line gives the verdict and the other cards supply supporting information. 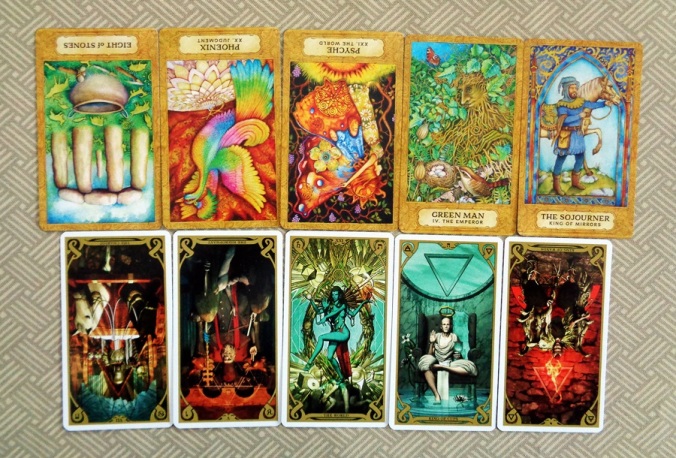 The fascinating thing about this reading is that both pulls produced the World as the central “focus” card; in the “best-case” line it’s reversed, suggesting that thing won’t turn out as good as we might hope, while in the “worst-case” line it’s upright, implying just the opposite (or at the very least that the end is in sight). Another interesting thing is that there are no Swords in either row, giving the impression that no amount of reasoned analysis, hair-splitting and finger-pointing by the “experts” is going to make any difference. Finally, the King of Cups appears in both lines, showing that an upbeat attitude will be a sustaining force in one scenario and will not be completely extinguished in the other.

In the “best-case” line, the 8 of Stones (Pentacles) brings to mind the old aphorism “it’s a tough row to hoe,” but we will rise to the occasion despite the hardship.

The Judgement card in this deck is titled “Phoenix,” the mythical bird that rises from the ashes of its own immolation. Its reversal indicates a slow-but-sure return to normal (or the “new normal,” anyway).

The World reversed echoes an observation from an early reading on this subject: “We will come out of this less robust than we went in.” The reversal and the correspondence of this card to astrological Saturn means that it will take longer than we’d like to assume.

The Emperor (“Green Man” in this deck) shows some concern about the degree of authoritarian intervention that may be necessary to turn things around. But it’s not reversed, so this should be no more than is appropriate to stimulate recovery.

The King of Mirrors/Cups (“The Sojourner”) conveys a sense of calm throughout the critical period.

From the standpoint of elemental dignity, Phoenix (Fire) and Green Man (Fire) are mutually “neutral and supportive” regarding Psyche (Earth), suggesting more of a measured response than one of blind optimism. We will take this in stride and not be prematurely aggressive in our efforts to rebound.

In the “worst-case” line, the Chariot reversed implies the “wheels falling off the bus;” in any projected recovery we will definitely lose more than we save.

The Hierophant reversed seems to be showing resistance to the official “dogma” of the government’s initiative to control transmission of the virus that is prevalent in some parts of the country (e.g. ignoring guidance to stay at home, avoid large groups, maintain “social distance”).

The World conveys the conclusion that, when all is said and done, the threat will be overcome through nothing more than sheer persistence and “grit.” We will outlast it but it will still “knock the stuffing out of us.”

The King of Cups is offering mild and unconvincing assurances that things won’t be as dire as they almost certainly will turn out to be.

The King of Wands reversed could mean that draconian measures will eventually have to be taken anyway.

Elemental dignities for the World (Earth) are friendly, with the Hierophant (Earth) and the King of Cups (Water) on agreeable terms with it, but this could just mean that they are “greasing the skids” for the World to plunge into chaos. However, it’s more likely that they will simply offer a misplaced sense of residual comfort when things are at their darkest.

Overall, this reading is a mixed bag since the two World cards are delivering conflicting testimony as mentioned in the second paragraph. If I had to predict (and I assume this is what you’ve been waiting for), I would say that the “optimistic” projection has more going for it, at least for much of the nation.