This method first appeared in a “whodunit” reading for a murdered New Hampshire woman that I posted in October of last year, but I can never find it when I want it so I broke it out into its own post. The court-card representing the suspect will typically have come up in an earlier spread exploring the “whodunit” aspects of a violent crime. Alternatively, it can be drawn from a sub-pack of court cards as a preliminary to pulling the three trump cards of this layout; in that event, this spread could be used for any situation involving a challenge from unknown adversaries. 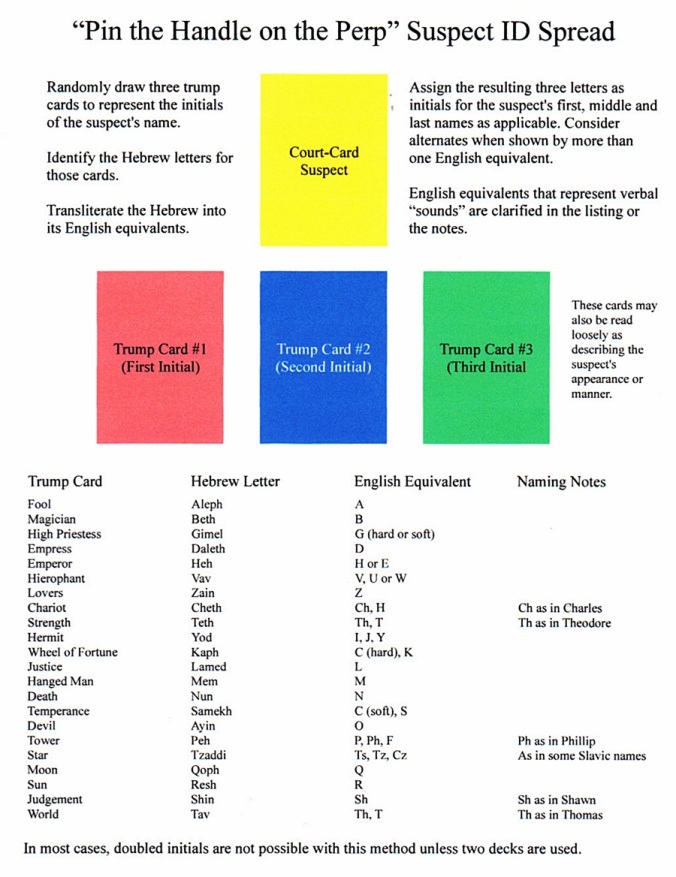 For reference, here is a link to the original post:

A new wrinkle I’m experimenting with is using the Hebrew letters assigned to the tarot trump cards by the Hermetic Order of the Golden Dawn to come up with a three-letter set of initials for suspects in these cases. Starting with the court card for the unknown perpetrator as a “significator,” I pull three random trump cards from a segregated set, identify their associated Hebrew letters, transliterate those letters into their English equivalents, and from those create the initials for first, middle and last names, assuming the individual has all three; if that’s not likely, I will improvise. (The three trumps can also be read as a description of the suspect.) In the referenced case, I came up with the Hanged Man, the Chariot and the Tower. These cards suggest an emotionally withdrawn man, possible with a poor self image, who may have been “on the move” and who was possessed of a violent temper.

The Hebrew letters for these cards are Mem, Cheth and Peh, which transliterate into “M,” “Ch” or “H” and “P, “Ph” or “F.” So the full set of initials could have taken one of several forms: MC(h)P, MC(h)P(h), MC(h)F, MHP, MHP(h) or MHF, with the parenthetical lower-case letters signifying the initial sound of the name it is associated with (for example, “C(h)” could mean “Charles;” “P(h)” could be”Phillip,” “Phelps” or “Phelan”). For practical purposes, the sets can be reduced to their single-letter style, eliminating the parens: MCP, MCF, MHP or MHF.