With the global response to the spread of the COVID-19 coronovirus bordering on panic, doubts have been raised about the viability of continued globalization in world affairs. I decided to take out my reliable sociopolitical bellwether, the Post-Modern Tarot to ask the question “What will become of the New World Order in the wake of the worldwide COVID-19 pandemic?” Before I start, though, I want to note that I’m curious when the adjective “populist” came to mean “isolationist” and “xenophobic” since I always thought “popular” meant socially well-favored, not socially repugnant; it was often applied to a political “man of the people.” If it simply means that the majority of the populace in a given country opposes increased entanglement in pan-global economic and political agendas, priorities and strategies, where is the fault in that (if they can pull it off)? It goes to show how words can be skewed to serve a sociopolitical purpose. I used my “Moving Finger Situational Development Spread,” which requires reversals. 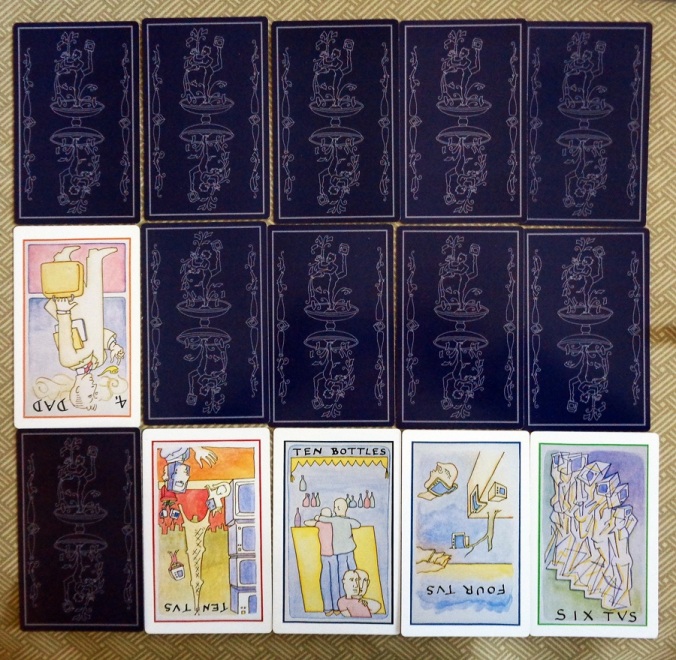 The roll of the die came up “2” so I turned over the first card in the second rank. It was “Dad” (the Emperor) reversed. The second tier of the spread is titled “Twilight Zone,” suggesting an uncertain road ahead, and the first thought that came to my mind was “Dad is checking out.” The implication is that the one-world-government notion could go into eclipse. An alternate take on this card would be that it shows loss of sovereignty (a globalist goal), but of the remaining cards only the 10 of Bottles/Cups is at all sympathetic to this interpretation; the numerous TVs/Swords reflect antipathy: mental wreckage with a subdued aftermath that struggles to sort things out.

Because the first card was reversed, I dropped down to the third rank, which is titled “Dark Side” or “Pessimistic Path,” and revealed Card #12. It was the 10 of TVs/Swords reversed (I don’t buy Brian Williams’ position that Swords are Fire, and stay with the traditional correspondence of Air, indicating “trouble”); this card shows that nations will be at each other’s throats and underhanded “backstabbing” is likely. (Or, interpreting the PoMo image literally, it could just be saying “The Eiffel Tower is closed,” symbolic of world shutdown.)

I had arrived at the bottom of the spread, so I stayed in the same rank for the next “reveal,” Card #13; it was the 10 of Bottles upright. I’m inclined to see it as a surge of sentiment on the part of globalists to try to regroup and recover their mojo in the face of a potentially fatal stumble. As the central card in the linear progression, it suggests that the “heart” will remain in the movement, but there is no Earth to prop it up so the abundance of hypercritical Air may pick it apart.

Card #14 in the third rank was the 4 of TVs/Swords reversed, showing “running out of gas” (e.g. intellectual capital) in furthering the principles of the globalist cause, and the ultimate reality of dwindling prospects The ideological fervor of the concept may falter when confronted with its undeniable social disadvantages as shown by the current health crisis. As a discredited (or at least suspect) theory, it must “go back to the think-tank and lick its wounds.”

The 6 of TVs/Swords upright as the last card of the series suggests having to mull over and perhaps rethink the globalist strategy. The image on this card is interesting, in that it seems to portray further descent (into the maelstrom?) when things already can’t go any lower, at least in terms of this spread. It looks like someone “walking the plank” to me, although I know it’s only Williams’ rendering of Marcel Duchamp’s “Nude Descending a Staircase” (hmm, is she wearing the “Emperor’s new clothes?”). I’m thinking “It ain’t over ’til it’s over” and “Hang onto your hats, folks!”

My impression from this spread is that economic, social and political globalization will take a decisive (if only temporary) step backward as a result of this distressing situation, and the so-called “global elite” stand to incur a huge loss of credibility in the process (although nothing here implies an unrecoverable financial apocalypse). It couldn’t happen to a more deserving bunch of people. This scenario will warrant another reading in six months to see where the 6 of TVs leads, since “technology marches on” and it is unquestionably fueling globalization.

Full Disclosure: I’m neither a hard-core progressive nor a globalist, at least not in pragmatic terms; it’s a nice utopian fantasy that sounds good but doesn’t really add up given the fallibility of human nature (except, of course, to line the pockets of the global elite). But as always, I “just read the cards” in as even-handed a way as possible.