The 1984 Dali Universal Tarot was recently reissued by German publisher Taschen, and I received a copy of the updated deck as a gift. While not as sumptuous as the original version (no gilt edges and the card stock is on the lighter side), it is still an impressive product; the large box has a flocked, velvet-purple finish with gold lettering and trim, and the equally large – it fills the entire box – multilingual (English-German-French) companion book by Johannes Fiebig is gloriously illustrated with full-color scans of all 78 cards. Magnificent packaging! The cards have a smooth matte finish that is neither too slippery nor too sticky, although they are a bit on the large side for overhand shuffling; I can barely get my long fingers around them and have to hold them across the narrower edges to manage. (Not much different from the full-size Thoth, actually.) The trumps have gold title bands at top and bottom, the court cards just at the bottom, and the small cards have only a narrow gold band edged in black inside a standard white border. I didn’t notice any gold highlights in the pictures themselves. The minor cards aren’t numbered but their numerical values are obvious from the population of suit emblems.

There has apparently been criticism that this isn’t a “functional” reading deck, but from what I can see there are enough echoes of “RWS” in it to satisfy anyone with a good grasp of the Waite/Smith model. (The rest of us can just read them the same way we do any “pip” deck.) I can understand the complaints of those who bought the original deck that only the trump cards are “original Dali” works of art (not entirely true), and that the rest are just cut-and-paste collages of classical artwork with dashed-on suit emblems, strange doodles and Dali’s cornucopia of different signatures, some of which look like monograms. It’s undeniable that the suit emblems seem a bit “cartoonish” compared to the dignified images Dali selected to illustrate the minor cards, but the overall effect is sufficiently cohesive and pleasing. There is enough quirkiness in the designs to offset the artist’s rather staid choice of sources. As a graphic designer myself, I can see the “Master’s eye” at work in the layout of the cards.

It should be noted that Dali assigns the Hebrew letters of Eliphas Levi’s model to the trump cards – with the unnumbered Fool given Shin (Fire or Spirit) as the 22nd card –  and not that of the Hermetic Order of the Golden Dawn, and his astrological associations are for the most part non-standard. (There are no Chaldean decan references on the minor cards.) I understand the reasoning for the former but intend to stick with what I know, while the latter, although not without a certain logic, leaves me unconvinced.  The companion book is silent on all of this so, if you use more conventional esoteric correspondences in your reading, you might want to ignore these variations.

I can envision myself reading with this deck in the same way I read with Brian Williams’ Postmodern Tarot. I pull that out whenever I have a particular type of subject matter to explore, and I think Dali’s deck will serve the same purpose as soon as I find its proper niche. With that in mind, I decided to run it through my “Tell Me No Lies” Deck Personality Profile (basically my “deck interview” spread) to help me do just that. 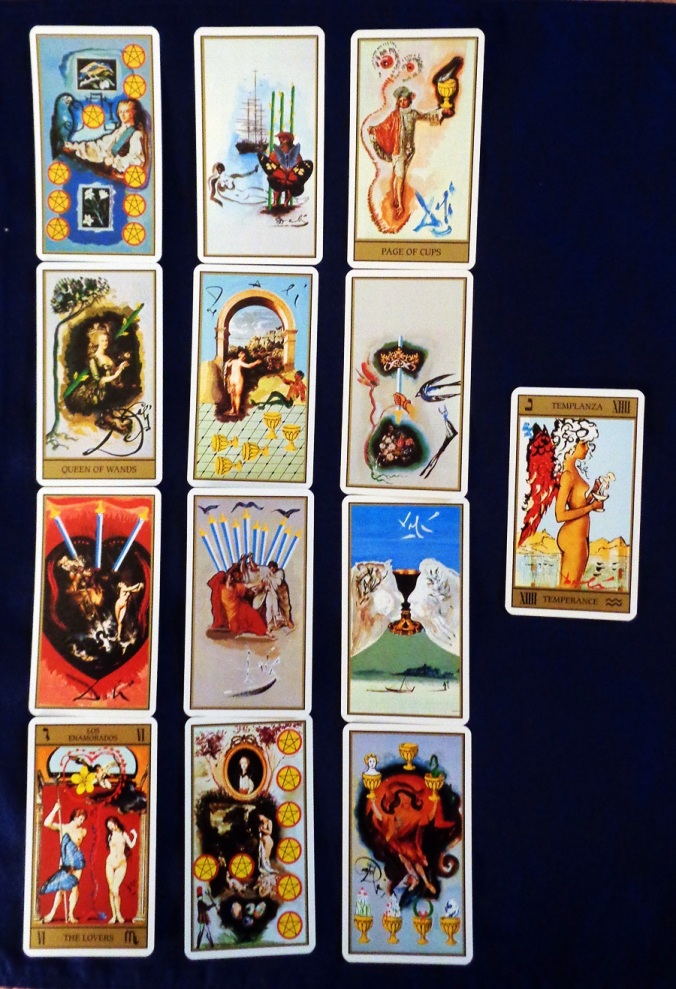 The left column shows the “First Impressions” a deck makes upon initial viewing; it is arranged from top to bottom in Wands, Cups, Swords and Pentacles (Coins/Disks) order. The card in the Wands position describes the kind of “energy” or vigor the deck exhibits, the Cups card portrays its emotional “heart,” the Swords card indicates how it will find its “voice” and the Pentacles card gives a sense of its “substance” or purposefulness.

The 9 of Pentacles in the Wands position suggests that this could be a good deck for “business” readings. In addition to being about ambition and initiative, the suit of Wands relates to enterprises of all kinds, and the suit of Pentacles can “take that to the bank.” As the “perfection” of the suit, the 9 of Pentacles has been particularly related to “Gain,” the objective of any enterprise that isn’t entirely philanthropic. (The image is of Count Stanislas Potocki, an accomplished Polish nobleman and patron of the arts.)

In the Cups position, the Queen of Wands is the most “forward” and volatile of the tarot Queens, intimating that she could have a low “boiling point.” (The image is that of Marie Antoinette, who needs no introduction). This quality should make the deck a feisty reading companion with a vivid imagination and a capricious, picante attitude, something Dali himself was known for.

The 3 of Swords in the Swords position won’t let a “sleeping dog lie” and will relish poking it with a sharp stick. I would expect some rather “pointed” observations from this deck that may be uncomfortably sharp for the recipient. (The image is of Roger Freeing Angelica, a scene from Ariosto’s epic Orlando Furioso and a motif closely related to the mythological theme of Perseus saving Andromeda from a serpent as used in the Golden Dawn version of this card.)

The Pentacles card is the Lovers. (The image is of the sea-god Neptune and his wife, Amphitrite.) I prefer the “decision-making” aspects of this card over the romantic angle (the Hebrew letter associated with it in the Golden Dawn system means “sword”), which aligns well with the entrepreneurial concerns of the 9 of Pentacles in Wands. As the only trump card in the spread other than the calculated “quintessence” (Temperance, its “opposite number” in the Golden Dawn system), the rational rather than sentimental side of the Lovers assumes a commanding role in delivering on the pragmatic promise of this deck.

The middle column reflects the overall “tone” or “manner of speech” the deck will display in use. The card in the Wands position captures its “spirit,” the Cups card conveys its “sensitivity,” the Swords card its “eloquence” (as well as its precision), and the Pentacles card its concrete “solidity” of expression.

The 3 of Wands in the Wands position is the card of the successful merchant, repeating the commercial inflection of the 9 of Pentacles. The keynote of “enterprise” as the proper niche for reading with this deck is becoming more plausible. (The image is not credited.)

In the Cups position, the 5 of Cups is the card of emotional flux, suggesting that the deck’s equanimity could be shaded to the temperamental side. It may yield observations that are more acerbic than accommodating. (The image is not credited.)

The 10 of Swords in the Swords position has a “take no prisoners” ambiance. (The image is The Death of Julius Caesar.) The deck will have a lot to say, much of it highly critical in nature.

The 8 of Pentacles in the Pentacles position has a decidedly utilitarian feel to it, something that once again favors the hands-on “business” perspective. (The image is The Artist’s Studio by Gustave Courbet.) In the aggregate, the cards in this column make me think the deck would be best suited to offering unflinching “nuts-and-bolts” advice to a struggling  entrepreneur whose efforts are floundering. They have a “take your medicine and shut up” vibe.

The right column offers a snapshot of the deck’s overall “personality;” its cards are read in combination with those in the middle column to give a sense of its “inherent nature.” The card in the Wands position expresses the deck’s “vitality” (and therefore its “stamina,” an indication of how robust it will be in use); the Cups card reveals its “fluidity,” a measure of versatility, the Swords card shows its “directness” in making salient points; and the Pentacles card gives an indication of its “reliability” as a tool for divination.

The Page of Cups in the Wands position, coupled with the 3 of Wands as “tone” card, has a fresh-faced enthusiasm and innocence about it that suggests the deck will be an overflowing well of inspiration every time it is used. (The image is The Indifferent Man by Jean-Antoine Watteau.)

The Ace of Swords in the Cups position is unsentimental to a fault; those seeking emotional hand-holding need not apply. When infused with the unsympathetic tone of the 5 of Cups, the deck’s empathy could be questionable. I doubt I would use it for romantic readings. (The image is Still Life with Flowers by “a Dutch master.”)

The Ace of Cups in the Swords position takes some of the harsh edge off that perception with a more conciliatory stance, but I think it may be overwhelmed by the 10 of Swords and 3 of Swords that precede it. It looks like a case of “too little, too late.” (The image is Allegory on the Grail, a Dali original for the deck.)

The 7 of Cups in the Pentacles position brings Dali’s surrealist sensibilities to the fore, something that was already embodied in the RWS design that seems to have been his inspiration. The mystical overtones of this card don’t play at all well with either the pragmatism of the 8 of Pentacles or the rational agenda of the Lovers; if there is a false note in my “business reading” intentions for the deck, this is it. However, if what is needed is wild-eyed extemporizing when all practical solutions have failed, here we have it. I would be willing to give it a try. (The image is The Isenheim Alterpiece, Resurrection by Matthias Gothart Grunewald).

The “quintessence” card derived from the twelve positions in the spread is Temperance, an original image by Dali. (Interestingly, the sum of the cards came to 77; maybe Dali was “one card short of a full deck” by the time he was done with this project?) Temperance is the alchemical counterpart to the Lovers (Sagittarius to the Lovers’ Gemini) in the Golden Dawn system. It expands the Lovers’ linearity of thought into more philosophical space. I believe I will get some well-reasoned impressions from working with this deck.

In summary, I already love the deck for its consummate artistry and I believe I’m going to appreciate its off-beat wisdom just as much.