The new year is almost upon us, so I created another “annual look-ahead” spread that can be taken in 3-card monthly bites or in one giant 36-card, 12-month gulp. The spread uses an “envelope” concept in which each monthly three-card column has a “steady-state” card and two transitory scenarios, one “best-case” and the other “worst-case.” Recognizing that we all have our ups-and-downs, the variables show the probable nature of the “high-water-mark” (the “+” card) and the “low point” (the “-” card) for the month ahead but don’t indicate when in the month they might occur. Weekly readings can be done at the beginning of the month to narrow it down. The color-coding reflects the seasons in the Northern Hemisphere. I would look to any trump cards that appear as indicators of more significant months, and any court cards as showing months of heightened social involvement (which could mean conflict as easily as cooperation depending on the nature of the rest of the cards). The minor cards will display less-momentous routine circumstances. As in all such spreads, judgment must be applied in handling positive cards in negative positions and negative cards in positive ones; I use an interpretive model that assumes moderation or mitigation of the influences.

The full-year version has similarities to the Lenormand Grand Table, although it is compartmentalized by month and the tarot has ranks (trumps, courts and minors) while all Lenormand cards are of equal importance (except as may be conferred by their position in the spread and their positive, neutral and negative nature). 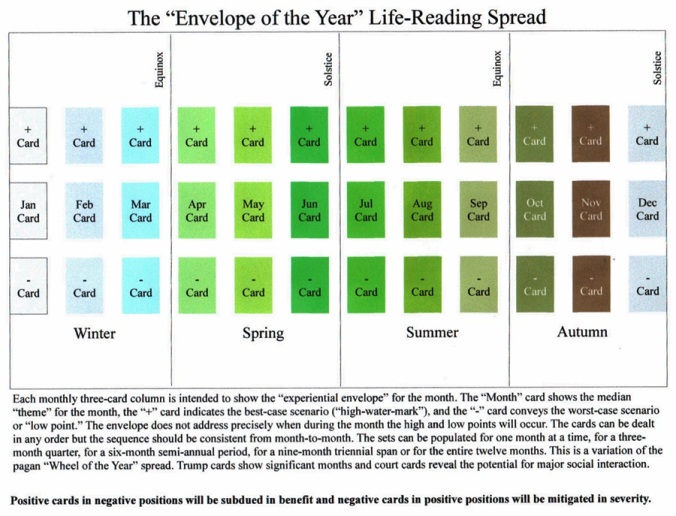