As I continue to explore the whereabouts of George Cross, who went missing from Berlin, NH in early September, I brought my new astro-tarot location method to bear on the case. For continuity, I chose the same Significator – the King of Swords – that appeared randomly in my previous reading, and this time I used the Waite-Smith Centennial Edition deck with reversals.

The King of Swords appeared reversed in the 1st House of the pattern, in the “natural” ruling sign of Aries. This repeats the testimony of the horary astrology chart that I did on October 24, which showed the ruling planet of the horoscope rising on the eastern horizon and practically “begging to be discovered.” Two very different methods of inquiry, both suggesting that George is “close to home” (that is, not far from his habitual “stomping grounds”) and somewhere to the East of that area. The Significator is just slightly below the horizon, giving the impression that George is hidden from the view of casual passers-by but not deeply concealed, although its reversal implies some kind of  camouflage that could have been either accidental or intentional.

Once again, the location of the reversed Significator in the 1st House indicates that George may have put himself at risk in some way through his own actions, and the other cards that landed in that position could shed some light on how that happened. Although it is presumed that George is currently outdoors, the Fire sign of Aries – a secondary consideration to hemisphere, quadrant and house emphasis – could mean that he is near a “source of heat,” which outdoors could describe a power station of some kind, and a “Fire” position can also mean “near a wall” (although that is typically an indoor phenomenon). However, this should be considered a long shot.

Both of the “lights” – the Sun and Moon, the main indicators of “visibility” – are below the western horizon and reversed. This further complicates efforts to find George by being doubly diminished, but their location at the far side of the layout from the Significator could mean that, once the right area is entered, a more-than-casual scrutiny of the landscape should reveal something useful. This is a location technique only so I don’t read the rest of the cards in the spread for their interpretive value, but seeing the Chariot in the same location as the reversed Moon once again brings me back to the idea of the railroad depot mentioned previously; this is another long shot but still worth noting. Also, the 6th House that holds the Moon is the house of “small animals,” so it may be profitable to bring in search dogs if that hasn’t already been done. The Moon is intuitively sensitive, so if its visible light is blocked, the value of other senses may increase in importance.

The following cards turned up in the same location as the King of Swords. I don’t read these as a straightforward narrative sequence, just as additional information surrounding the main thrust of the reading that may offer clarification. 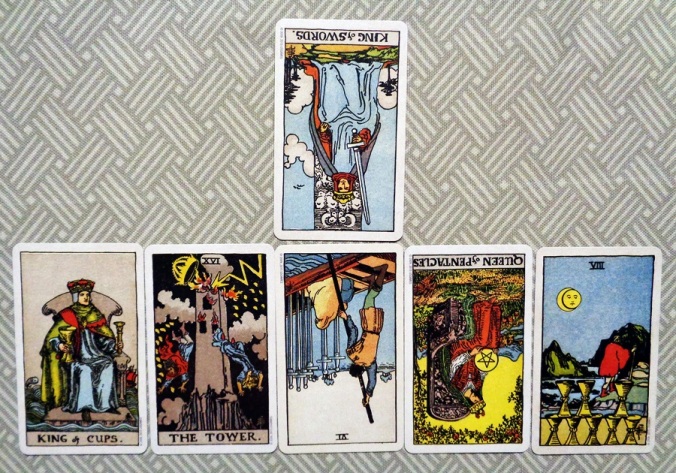 The standout card in this set is the Tower, which normally depicts some kind of catastrophic trauma (repeating the volatile “Mars” energy that played a significant part in the horary astrology chart); the 1st House and Aries presume a head injury. The 6 of Swords reversed is a repeat from my previous reading of September 22, suggesting that George may have “passed over,” but also that he could have been “borne away by water”  and could still be submerged. The Queen of Pentacles reversed conveys the idea that patience and diligence will be required to find him, but also that those virtues may not have a lot to show for the effort in the near term. The watery 8 of Cups is further testimony to  being “borne downriver,” which has always been an underlying theme in this case.

That brings us to the King of Cups, which is a decidedly different influence from the aggressive younger man shown in previous readings. If it describes another person, it would be someone of fairly placid disposition and bland (maybe “soft”) appearance, possibly on the self-indulgent side and perhaps overweight. If it instead represents George from a situational perspective, he could have innocently blundered head-on into the “Tower” situation. As a group, these cards lend credibility to my alternate scenario of “being hit on the head and thrown into the river.”  If that is in fact the case, the Queen of Pentacles reversed implies being “weighted down” in some fashion to preclude discovery. But that would almost certainly have meant premeditation, which nothing I’ve seen shows to be likely unless a pre-planned robbery was the motive, suggesting an assailant who knew George’s status and daily movements. At the suggestion of one of the search group members from Berlin, I ran my “suspect ID” spread on the assumed aggressor (although I normally use it only for confirmed homicides) and came up with the initials “DMT,” with the “T” perhaps “Th” as pronounced in “Thomas.” Since Hebrew words are read right-to-left, “TMD” is also a candidate.