Although I understand why we do it, I’ve never been entirely satisfied with the fact that most methods of dealing the cards draw them from the top of the deck after the shuffle and cut similar to the way playing cards are dealt for games. Some readers circumvent this by pulling the cards from a “fan” held between the hands (I find it awkward), while others reassemble the deck randomly after the cut to mix things up a bit more. I decided to do something different, using both cards and dice.

The first step is to shuffle the deck in your usual way, and then cut it into two roughly equal packs. One pack is the “odd” pack and the other is the “even” pack. I treat the left pile as odd and the right one as even, but it doesn’t matter which is which as long as you keep them straight in your head. The point is that the cards in the middle of the pack are just as important as those at the top since they’ve all been “conditioned” by the shuffle. 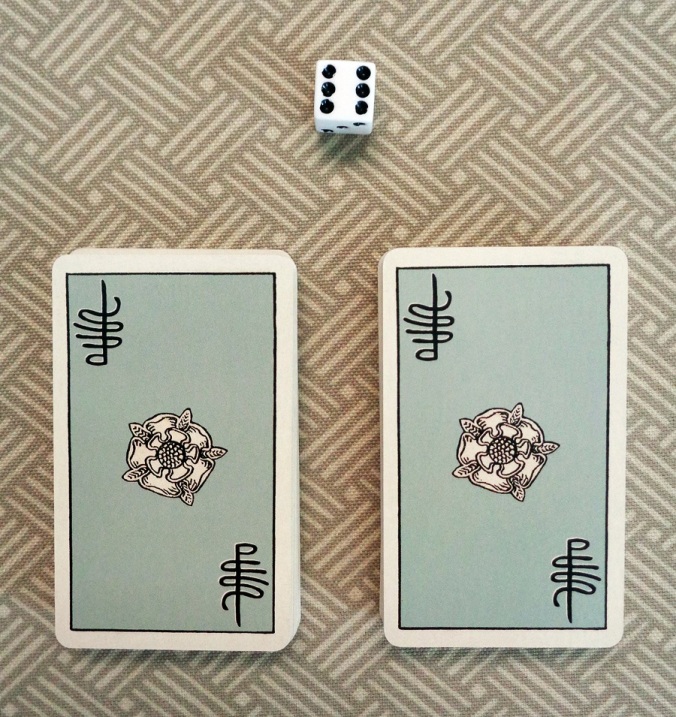 Here I’m using the 10-card Celtic Cross spread for my example reading. In the photo below, I’ve removed the top six cards from each sub-pack and spread them out, left-to-right in top-to-bottom order, to show the “pool” of cards that will form the alternate piles for the pull. In practice, they will remain in the deck until dealt. 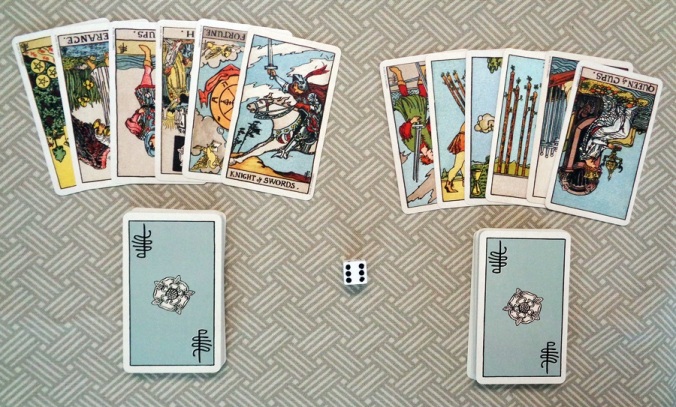 Using a single six-sided die, roll it ten times (or as many times as your particular spread requires) and after each roll – depending on the number of spots rolled –  draw a card from the “odd”or “even” pack and place it in the next position in the spread sequence. Note that, as I built the layout shown below, all but three of the cards resulted from odd-numbered rolls and I had to go into the remaining “odd” pile to get the last card, the 7 of Pentacles. It’s interesting but not really significant that the first five cards in the “cross” section of the spread came from the odd pack, while two of the cards in the “staff” section were also odd. A case might be made that odd-numbered cards are “active” and even-numbered cards are “passive,” but the rank, suit/element, “face value” and inherent nature of the card in question should be the first consideration in making that call. (You may have noticed that some of the cards that came from the “odd” pack actually bear “even” numbers and vice versa, so it’s actually only a selection criterion.)

In this example, it looks like the querent was a bit unbalanced before going through a major life-changing upheaval that wasn’t handled all that well; the individual won’t really wind up any  better off than before and will now have to work harder for it. Could be a “slacker” who was kicked out of the house or fired and doesn’t quite know how to cope. Maybe that Knight of Swords will “bluff his way” into something more rewarding but the reversed 7 of Pentacles certainly doesn’t show it. This seems like a reading that I would want to use one of my supplemental techniques on for more long-range outcome information. 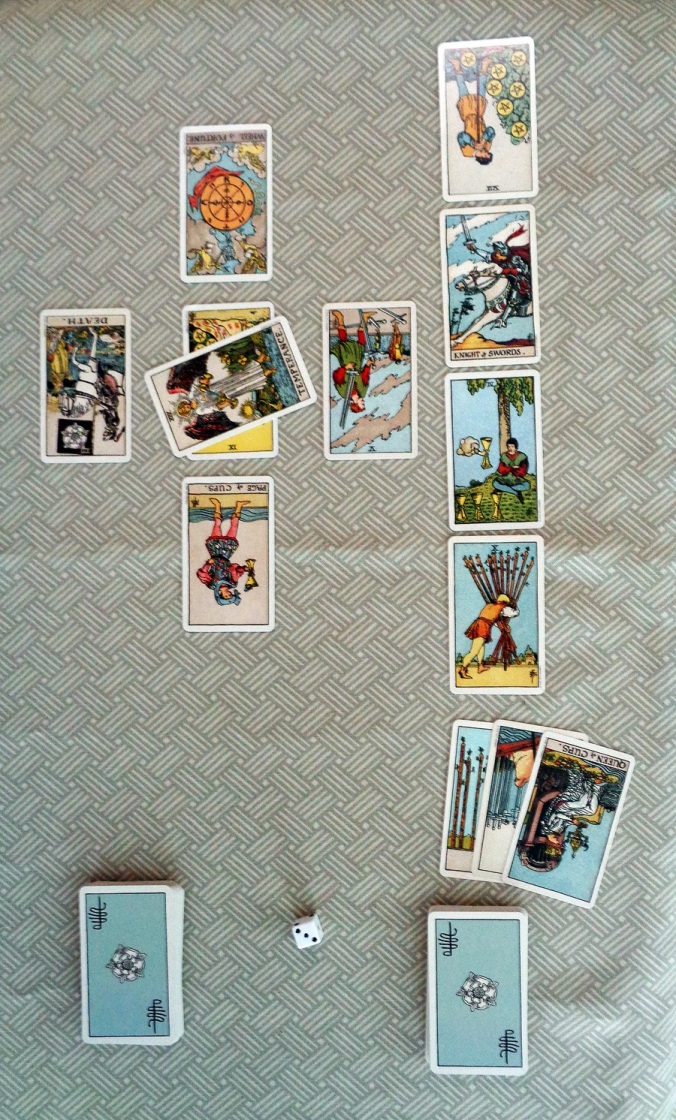