The German cosmobiologists of the mid-20th Century held that the “soft” aspects between planets (the sextiles and trines along with the less prominent quintiles and bi-quintiles) were largely a waste of time in that they seldom show anything “visible” happening. These astrologers focused on the “hard” aspects –  squares, semi-squares, sesquiquadrates and oppositions  –  when looking for clues that could be expected to culminate in observable events and therefore be predictable. The 45-degree semi-square was thought to be especially prominent and powerful. There was even a special astrological tool – the “90-degree wheel” – dedicated to finding these aspects quickly and easily (the use of which is still promoted by astrologer Maria Kay Simms).

I have always given a nod to this idea when considering the association of the 56 minor and court cards of the tarot to the 36 Chaldean decanates (aka “decans”) of the Golden Dawn’s system of esoteric correspondences. Thirty-six of the 40 “small” cards fit into this scheme almost perfectly with a little finagling, and the “remainder” of four Aces must be accounted for in another way. Similarly, 12 of the 16 court cards match the model quite well, with only the four Princesses/Pages as unincorporated outliers. The Golden Dawn resolved these surpluses by assigning the Ace and Princess of each suit to the rulership of a “quadrant of space” around the Earth’s North Pole, with each pair overseeing three signs of three decans each. Here is the layout with my color-coding added: 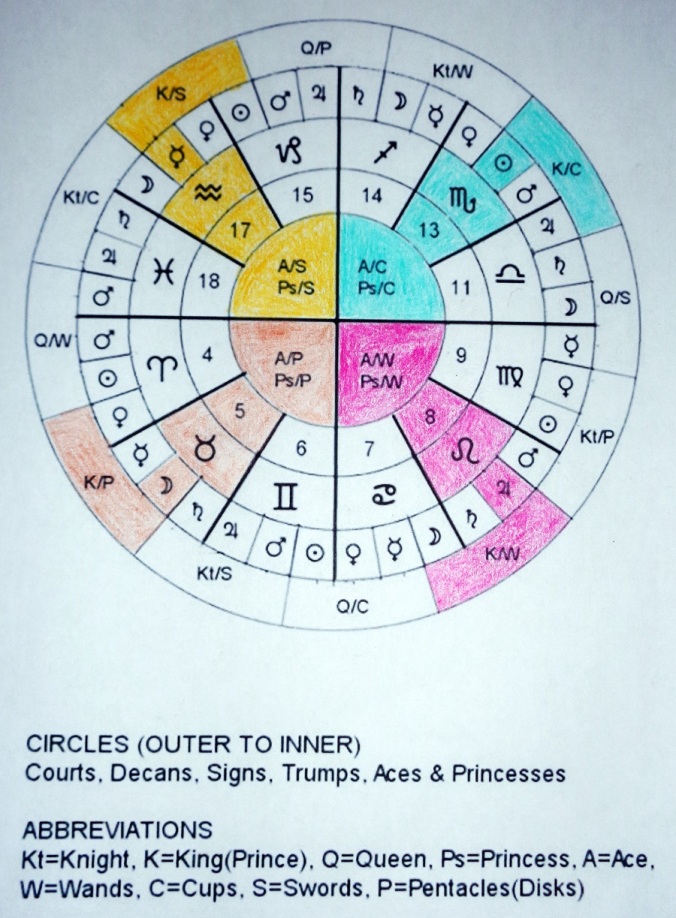 It struck me upon first seeing this pattern that the Aces and Princesses find their most concentrated and cogent expression in the middle, or “fixed,” sign of their quadrant, and especially in the middle decan of that sign, such that the element of the sign agrees with that of the two cards and the middle decan harbors the planet that acts with the least friction within its domain. It’s not an accident that these locations are anchored to the 15th degree of each fixed sign, which represents the 45-degree midpoint of the quadrant between the horizontal and vertical “spokes” of the wheel. This creates a kind of dynamic “tether” that pulls the Aces and Princesses into active engagement with the flow of the series of “decan” cards. This observation doesn’t seem to be “by design” as far as I can tell from my reading, it’s purely a product of my own deductive reasoning (and may just be “fertilizer” from an overheated imagination).

It also doesn’t seem to be a fluke that these four signs embody the four “Holy Living Creatures” of the vision of Ezekiel that sit at the corners of the World card: Taurus represents the Bull, Leo the Lion. Scorpio the Eagle and Aquarius the Angel or Man. The planetary alignments are the Moon in Taurus, the sign of its exaltation (6 of Pentacles titled the “Lord of Material Success”); Jupiter in Leo (6 of Wands titled the “Lord of Victory”); the Sun in Scorpio (6 of Cups titled the “Lord of Pleasure” and a bit more “steamy” than its native Mars); and Mercury in Aquarius (6 of Swords titled the “Lord of Earned Success” and also “Science”). These planets symbolize the “agents” or “boots on the ground” for the polar governors that operate via the “solar” potency of the Sixes, establishing their “kingdom on Earth” through the administrative vigor of the fixed signs. The Aces can be ephemeral and the Princesses capricious, so harnessing their energies to the fixed signs serves to “nail their feet to the ground” in preparation for alliance with their contrapuntal twin in the Princes via the mediation of the linking planet. (A parallel viewpoint is that the Princesses, as the “Earth” aspect of their respective elemental hierarchies, already have one foot in fixity.)

In this view, the Ace and Princess of Disks have a special affinity for the 6 of Disks and the Moon in Taurus as their “earthly emissaries;” the Ace and Princess of Wands empower the 6 of Wands and Jupiter in Leo to carry their banner; the Ace and Princess of Cups rely on the 6 of Cups and the Sun in Scorpio to administer their diffusely cathartic aims, and the Ace and Princess of Swords convey their visionary tactics through the 6 of Swords and Mercury in Aquarius. I also find it instructive that the Sun and Moon are diametric opposites in this schema, and Mercury and Jupiter are also opposites of sorts, one representing the “lower” (facile and tactical) mind and the other the “higher” (thoughtful and strategic) mind. When I see one of the “6” cards in a reading, I often envision the corresponding Ace and Princess of that suit lurking in the background and looking over its shoulder. One is the “steward” that underwrites its mission with elemental capital and the other is its sympathetic “handmaiden” along the road. It may not be useful to bring these peripheral assumptions to the attention of my clients, but they certainly underscore my appreciation for the minor cards as “supporting actors” in a larger drama.

While it could be argued that the original intent was for the Aces and Princesses to wield their influence evenhandedly over all three signs of the their quadrant, I can’t escape the suggestion that the elemental alignment between those pairs and the cards of the fixed sign favors those combinations over the rest for practical purposes, and the planet associated with the central decan in each case is its chief ambassador in the material world. The striking appearance is that of an “open channel” that also entrains the Princess’s male counterpart, the Prince (aka “King”) of the same element, for the two-thirds of its connection with the “fixed” decans, and the interfacing planet as its linchpin and “leading edge” in confronting the forthcoming ingress into mutability. It’s enlightening (or at least entertaining) to draw a few imaginative conclusions from the last point: the Prince of Disks is “always open to a better offer;” the Prince of Wands “always puts his best foot forward;” the Prince of Cups is “always on the make;” and the Prince of Swords “always overthinks his options.”

Taken as an aggregate, the visual arrangement resembles the clockwise-rotating Vedic swastika, a symbol of the Sun’s diurnal motion; the Sanskrit word means “conducive to well-being” or “auspicious,” while its negative counterpart, the counterclockwise-rotating sauvastika of Nazi infamy, symbolizes “night.”