These days everyone is a pop psychologist. In the minds of the culturally over-stimulated, every egotistical high-achiever who exhibits the slightest lack of empathy is labeled a “narcissist,” and any borderline misfit who ever harbors a dark thought is automatically branded a “sociopath.” The fact that few of these assumptions would satisfy the medical definition of a “clinical” diagnosis is conveniently overlooked. It’s the sociological equivalent of “comfort food” rooted in the intuitive paradigm “If it feels right it must be true.”

Anyway, I decided to conduct an experiment. A while back I posted what I consider to be the perfect tarot expression of the “Male Narcissist.”

It struck me at the time that these cards from Brian Williams’ Post-Modern Tarot look remarkably like the widespread popular opinion of Donald Trump, much of which I can’t dismiss outright although I don’t indulge in ad hominem attacks on public figures, no matter how ostensibly well-deserved. (I judge politicians by their actions [or their inaction] and not by their rhetorical bluster or their hair-do.) I’m skeptical, however, that Trump is actually “certifiable” since I doubt he ever feels self-loathing or sits awake at night secretly agonizing over whether he is liked, two underlying characteristics of the “classical” narcissist who publicly over-corrects for these perceived weaknesses.

I used these cards to craft a “personality profile” for Trump built around the “quintessence” approach to summarizing the overall influence of the cards in a spread. For those unfamiliar with it, here is my previous essay on the subject:

I populated the top row – the “Personality” line – with the “male narcissist” cards and calculated the “sub-quint” card for those three. The sub-quint turned out to be the Lovers*, which in the PoMo version suggests conjoined twins, or perhaps “a man kissing his image in a mirror;” in other words, unequivocal self-love, a perfect cap to the series.

* (I include the unnumbered court cards – here the Money Man/King is “14” – in my quintessence approach.)

I had it in my head that the second row would describe the “shadow side” of the personality cards, but what I think I got instead was a snapshot of the “tactics” the personality would use to project itself into the world. 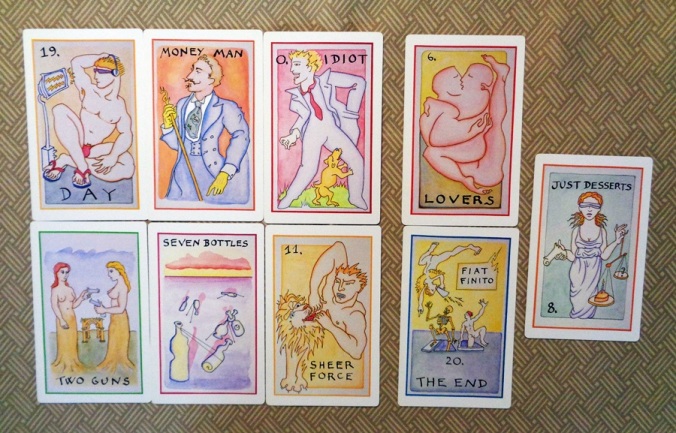 Pairing the 2 of Guns/Wands** with the Day (Sun) card begs the question: “What do you get when you hand a media-obsessed “glory-hound” a gun?” Answer: a confrontational stance and a self-styled crusade. Think Gary Cooper in High Noon, or Bruce Campbell’s character “Ash” in Army of Darkness: “I’m the guy with the gun!”

Money Man (King of Pentacles) with the 7 of Bottles/Cups suggests that the “successful businessman” facade hides more than a little “smoke-and-mirrors” up its entrepreneurial sleeve.

The Idiot (Fool) charges into the fray with the thoughtless bravado typified by “Sheer Force” (Strength). The “sub-quint” card for this row was “The End,” Williams’ version of Judgement. Rolling the first and second line sub-quints together yields “Just Desserts” (Justice/Adjustment). This conveys the poetic justice implied by Shakespeare’s phrase from Hamlet: “hoist with his own petard.”

** (I equate Williams’ suit of Guns to Wands and Fire for obvious reasons, although Williams chose them to represent Air.)

The third row sums the three pairs of the first two lines into a set of “sub-quintessence” cards showing the outcome of their interaction. 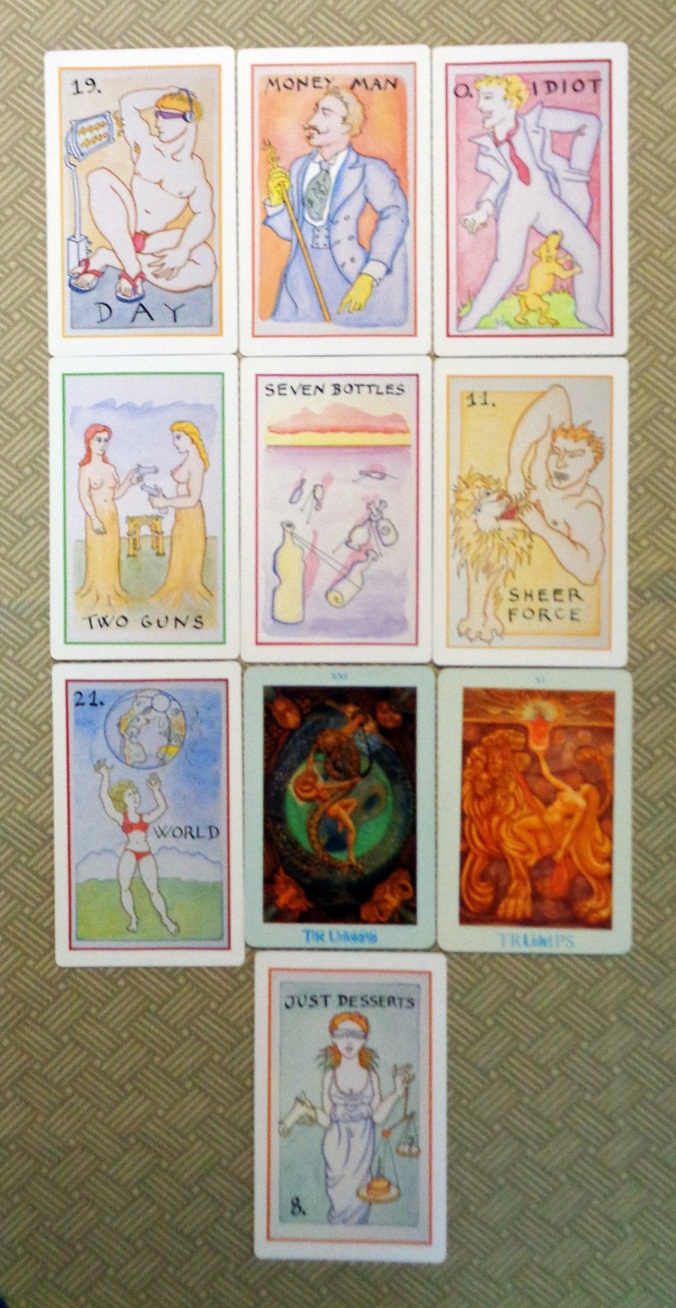 I find it fascinating that the “sub-quint” for both the Day and Money Man chains is The World/Universe, clearly depicting the success of Trump’s strategies and tactics in the realm of personal initiative, but also a sign that he may have “peaked” with nowhere to go but down. “Sheer Force” is carried forward into the sub-quint line since adding zero to eleven yields a second eleven. The whole series reminds me of Pistol’s threat to Falstaff in The Merry Wives of Windsor: “Why, then, the world’s mine oyster which I with sword will open.”

Adding the three sub-quints together to arrive at a “Grand Quintessence” card returns 53, which reduces to 8, “Just Desserts,” the same card generated by addition of the sub-quints in the first two rows. (In short, “the arithmetic works!”) Since “Justice is blind,” it isn’t evident whether Trump will find a pearl inside the oyster or just a slimy, stinking mess. I’m calling this the “Shake-out” card.

Consideration of the whole tableau reinforces some of these themes. 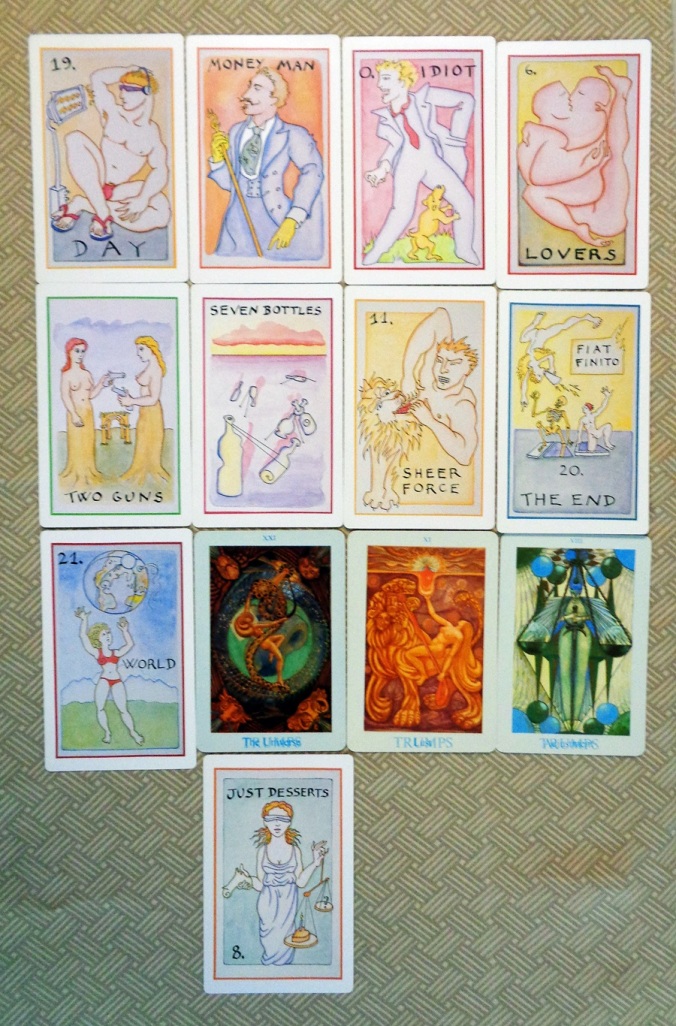 Both the two-card vertical set and the three-card horizontal set of sub-quint cards sum and reduce to “8,”  Just Desserts/Adjustment, the third iteration of this card in the layout. (I had to use the Thoth deck to accommodate the repetition.) The implication is that some kind of judgement is coming for Donald Trump but its consequences, while darkly threatening, are still uncertain.

As a last word on the subject (the “Ultimate Shake-out”), I added together the twelve cards in the main array (minus the Grand Quint card) and came up with “140,” which reduces numerologically to “5,” “Mr. Religion” (Williams’ version of the Hierophant.) This has me thinking that, when the dust finally settles, Mike Pence could very well emerge from the carnage as President of the United States. My understanding is that Pence scares the Far Left even more for his religious values than Trump does for his political agenda, so the cautionary advice is “Be careful what you wish for!” 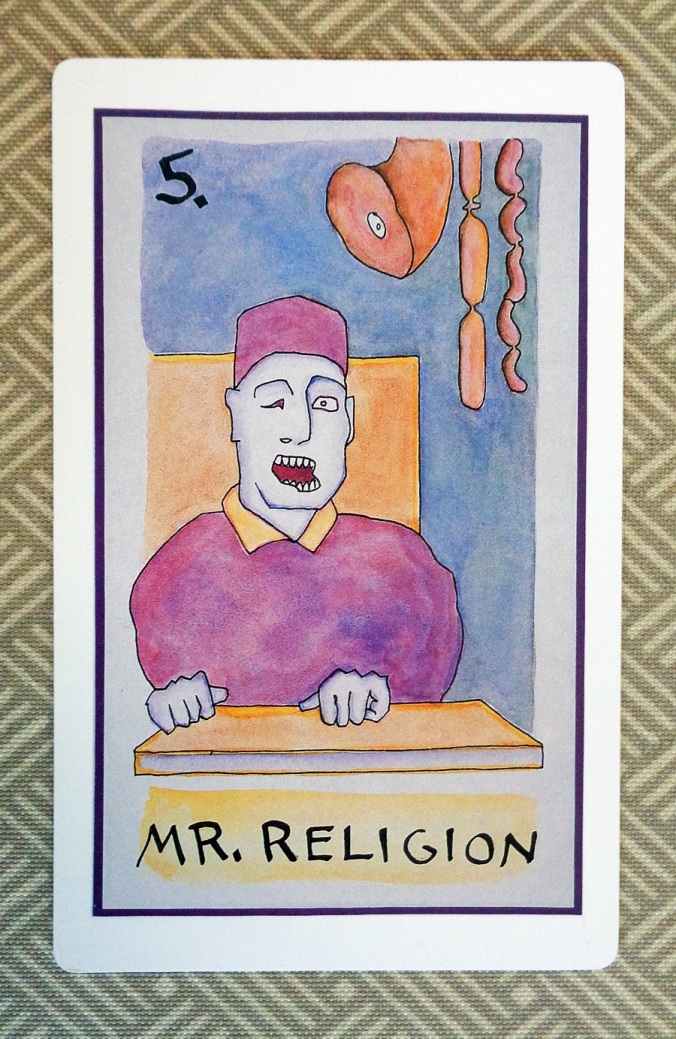