FINAL UPDATE: The remains were determined to be those of George Cross; they were found in a wooded area east of where he was last seen, in line with my original prediction. His death has been ruled “not suspicious.”

UPDATE #2: There may finally be a break in this case. Human remains have been found in the woods near Berlin, NH.

UPDATE: It looks like I made more than one mistake in this spread (seems I can’t read my own instructions). For a person of George’s gender and age, I should have been looking for the first King of any suit to appear in the layout, not the first Coins court-card. So I had to re-do the entire reading. Interestingly, the Roy d’Epee  came up on the second pass in the same position (“Deceased”) that the original, incorrectly-chosen Valet de Deniers occupied. (This appears to be a validation of the first reading; the Universe doesn’t lie to us, although we may sometimes do our best to “mis-hear” it.) The Cavalier de Baton fell directly beneath the King, reiterating the observation in the previous reading that there may have been some kind of altercation leading up to George’s disappearance.

George Cross, a 65-year-old man from Berlin, NH, went missing in early September. I performed my “World of Hurt” missing-person spread to see what it might tell me about his present whereabouts and condition. I used the Conver Ben-Dov Tarot de Marseille without reversals, and chose the Kings as the nominal Significator to represent George in the spread. 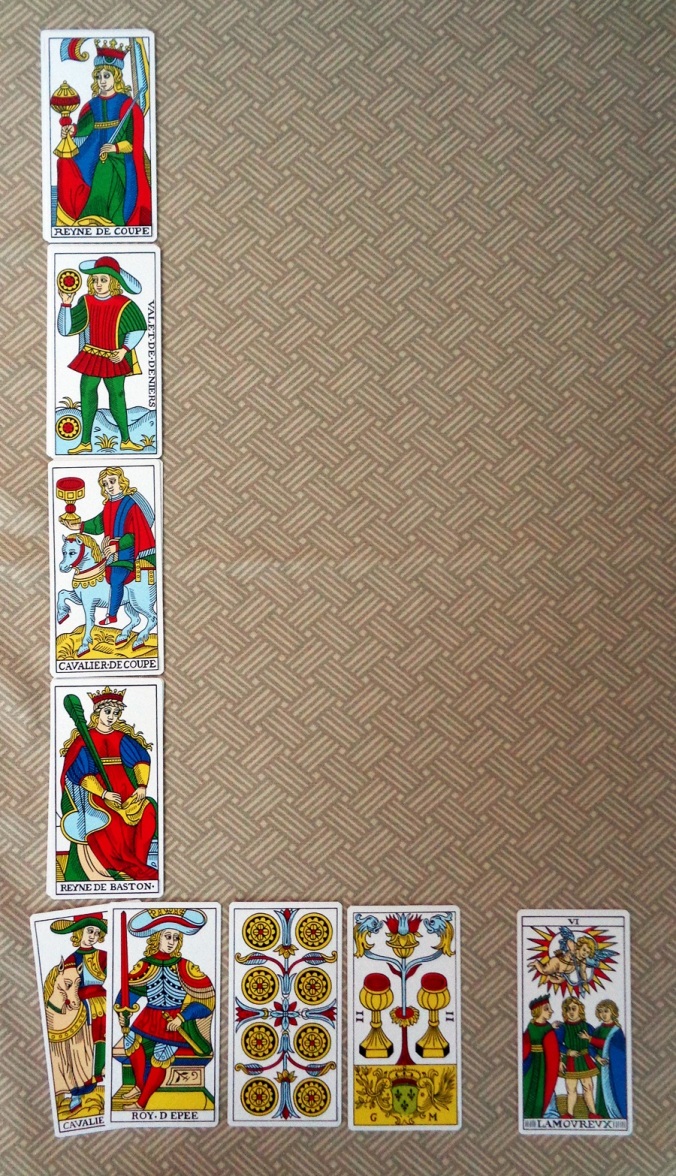 The first King to turn up in the “Significator” column was the Roy de D’Epee in the bottom row. The implication of this spread position is that George is deceased, with foul play and concealment suspected. The Cavalier de Baton appeared directly beneath the King, creating the suspicion that he may have experienced a confrontation with an aggressive younger man that led to his disappearance. The positional keywords state further “Buried, drowned, burned or dumped,” and the suit of Swords implies that he could now be in a cool, dry place. The area he was known to walk, Goebel Street, is a couple of blocks from the Androscoggin River and there is a railroad depot as well as a number of industrial concerns on that street. If he wasn’t in fact murdered, he may have crawled under a platform or loading dock, or perhaps into an open railroad car, for shelter from the overnight cold and didn’t come out.

The first card to the right of the King of Swords, in the “Will he be found?” position, was the 8 of Deniers. This is one of the “maybe” cards, so the outlook for finding George any time soon is no better than 50-50. The visual layout of the suit emblems implies that he may be concealed in an “enclosure” of some kind (it does have a “boxcar” feel to it). If he had been missing only a day or so, I might say he had gotten drunk and was sleeping it off. But the length of time that has passed makes that unlikely unless it has to do in some way with his disappearance. Perhaps he fell into the Androscoggin while intoxicated and drowned, or is out-of-sight somewhere near the river.

The 2 of Cups in the “When?” position suggests within two units of time (weeks or months) with the Cups implying a moderate delay. Although I don’t read this card as a formal part of the narrative, the 2 of Cups is titled “Love” in esoteric systems, so George may have been lured with some kind of “bait” by the Cavalier de Baton to get him into an agreeable frame of mind. My provisional interpretation for the TdM 2 of Cups is “A nascent willingness to engage emotionally, more a besotted promise than a binding pledge.” Perhaps the Cavalier de Baton was an erstwhile friend whom George crossed in some way. Another ad-hoc wrinkle is to calculate the “quintessence” card for the active row, and here it’s L’Amoureux (14+8+2 = 24; 2+4 = 6). George could have made the last “bad decision” of his life.

I also performed my “physical status snapshot” reading, using my “State of Undoing” probability table, to seek corroboration of the above verdict. I came up with the 6 of Swords, suggesting that George has “passed over” (or he may be in a boxcar somewhere moving across the country). The Magician as the associated trump card is neutral regarding larger influences at work in the situation, but it does imply that George, on his own initiative, got himself into a place where he won’t be easily found.

2 thoughts on “What Happened to George? – A Missing-Person Reading”