Having made a stab at identifying specific “yes, no or maybe” cards, I decided to try my hand at assigning “fast, slow or moderate” speediness to all of the tarot cards for use in answering timing questions. Although practical success with it has proven spotty, the general consensus is that Fire cards are the most rapid in their action and Air is second, while Water is more moderately-paced and Earth can be quite tardy. Trying to turn these assumptions into increments of time is fraught with philosophical improbabilities. Something that is normally expected to turn around in a week (“When will I hear the outcome of my job interview?”) is going to take years according to the cards? Nonsense (unless the real answer is “never”)! I like to say it won’t pass the “giggle test.” A more nuanced model is necessary, one that goes beyond simply saying that Ace means one unit of time and Ten shows (you guessed it) ten increments..

Trump cards are more unpredictable than they are “fast” or “slow” since they operate on their own timetable. But tentative assumptions can still be made based on their elemental, zodiacal and planetary correspondences. The court cards are more clear-cut: the mounted Knights and the standing Pages are first and second in speed of arrival, while the deliberate Kings and the patient Queens (both seated) are third and fourth. Blending the rank with the element of the suit creates a more complete (and complex)  picture. The small cards are subject to a variety of influences in addition to elemental quality. Qabalistic (that is, Tree of Life) number theory assumes that the Aces are the most energetic while the Tens are almost dormant.  The odd-numbered cards are considered “active” and therefore more animated, while the even-numbered cards are “passive” and consequently more inert. These can be translated into expressions of timeliness. Once again, exceptions must be made owing to the combination of suit, number and energy quotient. With this system, no timing prediction is intended to exceed one year, so the number series is more of a sliding scale than a set of discrete units of time. The Ace could mean tomorrow (Wands) or next week (Swords), the Ten next month (Cups) or before the end of the year (Pentacles). Context will be critical in deciding which it is.

Here is a provisional table of timing cards based on the above assumptions. This is still a work-in-progress and must be put to the litmus test of actual readings. 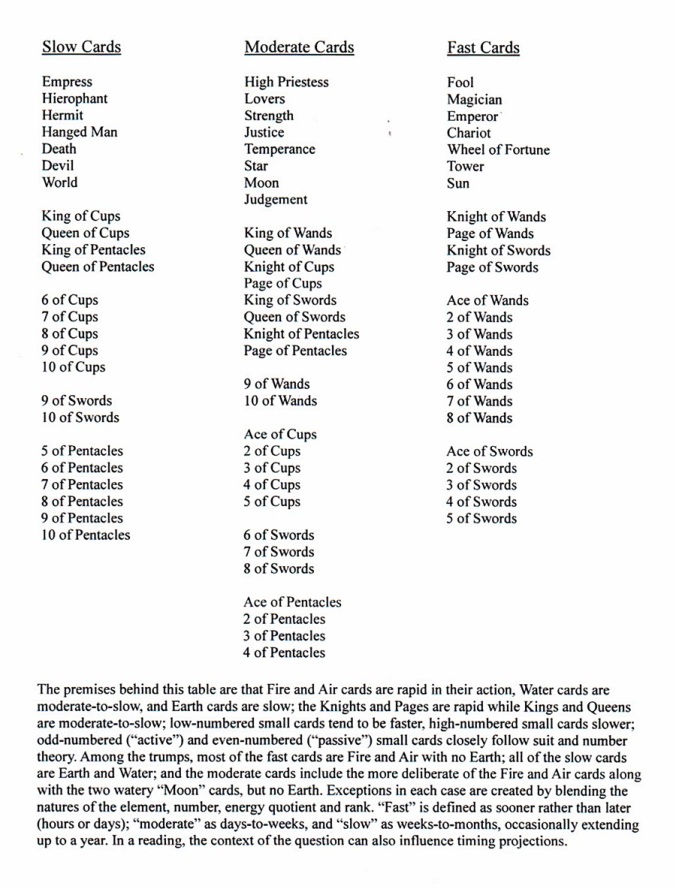 6 thoughts on “Rare, Medium or Well-Done: A Timing-Card Experiment”