My aversion to very small spreads is well-known; in most cases, even three cards don’t do much for me. However, I often find ways to extract meaningful subsets from larger patterns, especially if there are compelling indicators bringing them to my attention. The “cross” section of the Celtic Cross spread with its “past-present-future” triplicity is a good example of this, and has inspired me to use the same approach in other designs.

Here I’m applying A.E. Waite’s idea of “facing” to select one of four possible developmental paths for examination (although I had to get a little creative with it when court cards aren’t involved). On the surface, this looks like a 9-card layout with a central “focus” card. However, that card does quadruple duty as the “kick-off” point for four separate 3-card avenues of exploration. It serves as a “significator” showing the situation as it stands, and the path indicated by its facing reveals how circumstances are likely to unfold. These series are not the typical left-to-right 3-card progression but rather lead to four different outcome cards, with the middle card of each reflecting the transition phase or “turning point.” The placement of the second and third cards is predicated on the facing of the first one, and reversals are brought into play for focus cards that have no obvious facing. I haven’t really thought about it, but I might use the path opposite the selected one to show the “road not taken” as a potentially better way to go if the latter is unhelpful or seems irrelevant to the situation; it may not be too late to change direction. If needed, this series would have to be populated with two more cards from the top of the deck. 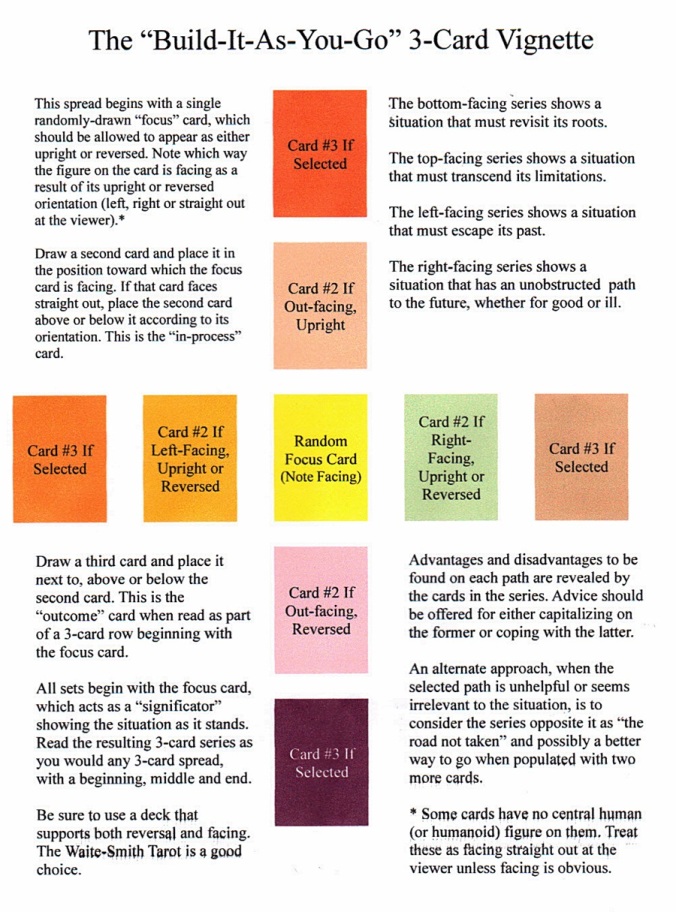