As I envisioned, the pocket-size Centennial Edition of the RWS “in a tin” is the perfect companion for Pixie’s Astounding Lenormand in two-deck readings. The latter was adapted  by Edmund Zebrowski from Pamela Colman Smith’s artwork, so there is an agreeable consistency in the images, and the size is roughly equivalent. I decided to do a reading to see what, if anything, would come of an attempt to reconnect with a former astrology and tarot colleague whom I lost touch with several months before we moved last December. We’re almost 3 hours apart now, so internet contact is the only reasonable way, but he hasn’t posted on his Facebook page in over two years and mutual friends in his area haven’t seen him in a long time. I used reversals in the tarot portion of this layout but not with the Lenormand cards. This is my Lenormand/tarot Celtic Cross hybrid spread. 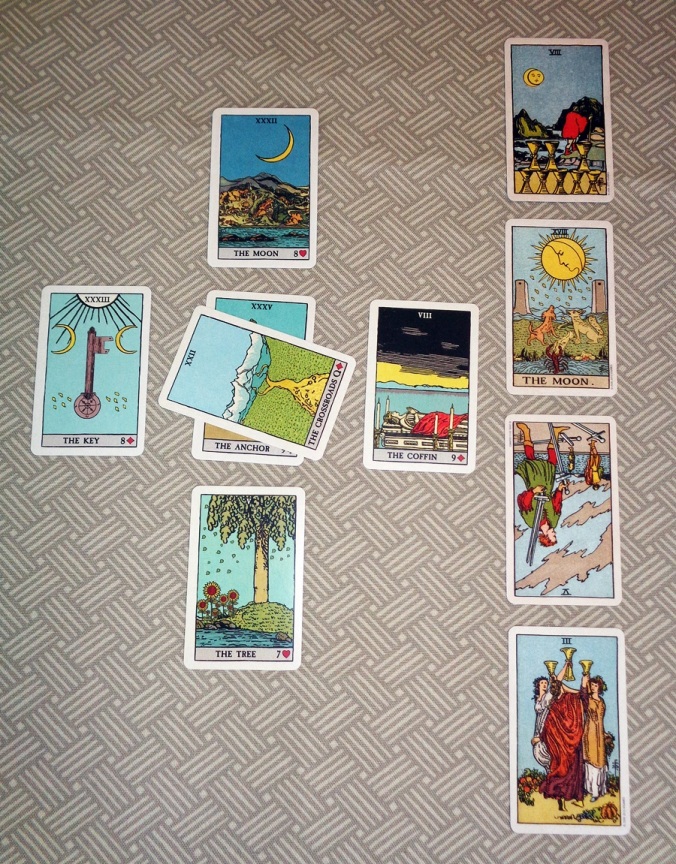 The Anchor in the “situation as it stands” position is basically saying “stuck, not going anywhere.” It’s neither positive nor negative here, just conveys the heart of the matter.

The Crossroads in the “crossing” position merely reflects that we went our separate ways.

The Tree in the “distant past” position shows that a certain health condition we both share (“spasmodic” – or non-crippling – polio in our childhood) offered some common ground for empathy. He is slowly succumbing to the latent effects of Post-Polio Syndrome, a debilitating nerve disorder, while I haven’t contracted it at this point.

The Key in the “recent past”position and the Moon in the “present” position reflect that our prior connection was founded on mutual respect.

The Coffin in the “near future” position can only mean that I probably shouldn’t bother. As far as I know he isn’t dead, but he definitely seemed frail the last time I saw him. I’m seeing “what’s done is done” here.

The 3 of Cups in the “fears, doubts, self-defeating attitudes, etc.”) position tells me that my caution about being too optimistic is prudent.

The 5 of Swords reversed in the “others’ involvement and influence” position suggests that he has withdrawn from social discourse.

The Moon in the “aspirations” position shows my aim of restoring a mystical connection with a kindred spirit, but also my uncertainty about whether it can be done.

The 8 of Cups in the “outcome” position is clear: I should just turn my back and walk away. There is no emotional satisfaction to be had.

While this comes across as a rather mean-spirited reading, I think it is just describing the sober facts of the situation.