Continuing the series, here is the “Candidate’s Profile” for Kamala Harris. As always, read my observations as possibilities, not definite conclusions. The cards tell the tale in their own way and I do my best to translate. 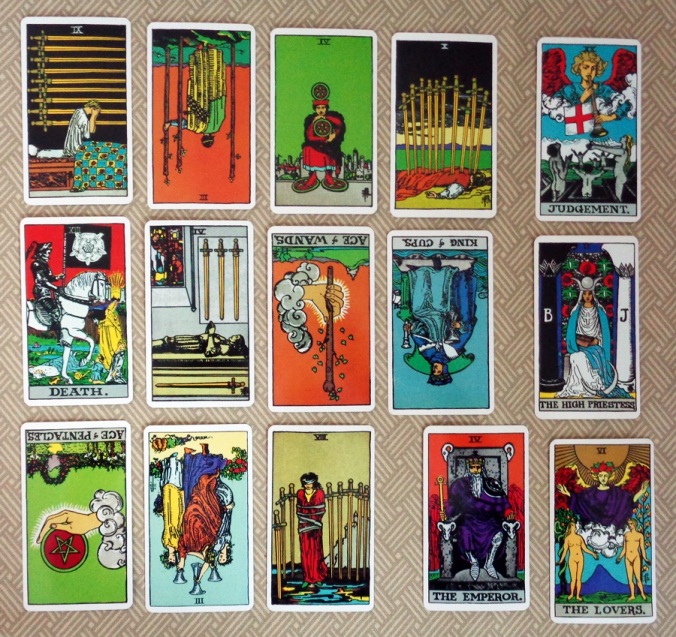 In the “Social Quotient” line, the “all-American male” could not imagine a worse candidate than Harris, even in his worst nightmare (9 of Swords).

The average American female isn’t holding her breath, although she might like to see Harris’ crusade succeed. (3 of Wands reversed)

Youthful voters seem to be comfortable with her mission. Perhaps, like Herbert Hoover’s apocryphal promise, they think she will “put a chicken in every pot and two cars in every garage.” (4 of Pentacles)

Older voters want none of her and fear she will “stab them in the back.” (10 of Swords)

The quint card is Judgement. Whether it means she is moving up or moving out, she is most certainly going somewhere. Aleister Crowley said of his version of this card: “Always represents the taking of a definite step.” It’s doubtful she could win the “popularity contest,” though.

In the “Policy Quotient” line, blue-collar workers are thinking they might as well commit suicide right now. (Death)

White collar workers aren’t paying attention and may regret it. (4 of Swords)

After the Russian meddling debacle, foreign governments are keeping Harris and her ambitions at arm’s length. (Ace of Wands reversed)

Financial markets are also maintaining a rather nervous reservation of judgment. (King of Cups reversed)

The quint is the High Priestess, suggesting that Harris’ policy-making  prowess is opaque (and perhaps invisible) to most knowledgeable observers.

In the “Moral Quotient” line, religious leaders suspect that they stand to lose a good deal of traction under her. (Ace of Pentacles reversed)

General public opinion is that she is a lightweight dabbler and won’t go far. (3 of Cups reversed)

Network media believe she has too many liabilities to be a contender. She will probably lose her way before long, especially if she forfeits their indulgence and advocacy. (8 of Swords)

The Quint card is the Emperor. It’s intriguing (but not surprising) that this card has shown up in the last two readings and also in Elizabeth Warren’s not-yet-posted one. It shows that none of our elected representatives “represent” anything other than their own lust for power and wealth. As Mel Brooks’ film characters often say, “It’s good to be the king.” Here it suggests that Harris is presenting herself to the public as a paragon of governance, after having convinced herself.

The Grand Quintessence is the Lovers, the same card Bernie Sanders had here, and it carries the same impression of a well-orchestrated con job as a way to lure voters onto the same page. It has me thinking of the W.C. Fields’ aphorism “If you can’t dazzle them with brilliance, baffle them with bullshit.” I doubt that national unity would emerge under Harris.