Although he hasn’t formally declared his candidacy for President in the 2020 election (and it’s looking increasingly less likely that he will), I decided to do this reading to assess Joe Biden’s chances. I’ve been using the Albano-Waite RWS deck for these spreads due to its vivid colors and easy readability. Note that my observations are all variations on “maybe;” they aren’t intended to express absolute certainty in any sense. 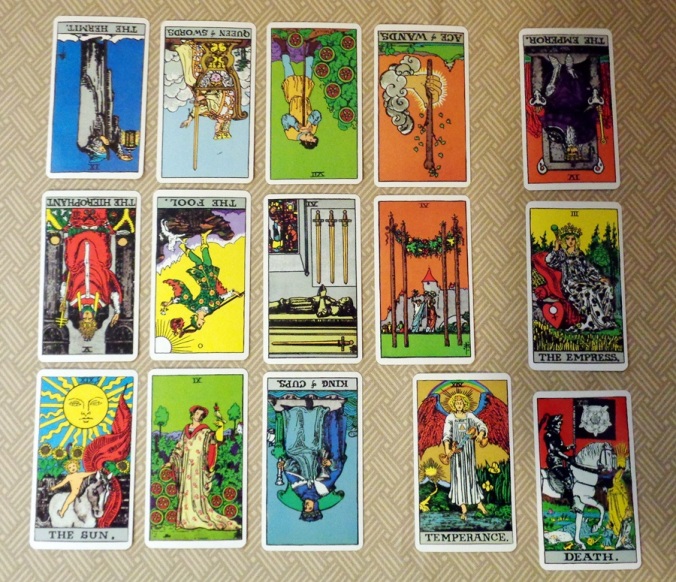 Right off the bat, the entire series in the “Social Quotient” quint line is reversed, making him look like a social pariah across the board. Interestingly, the Hermit in the “Male Cred” position is the same card that Bernie Sanders had here, and its reversal suggests that he is even more viscerally unappealing to the “average American male.” Somehow he just doesn’t look like a Budweiser drinker.

The Queen of Swords reversed in the “Female Cred” position almost certainly shows that there are a few women intent on “cutting him off at the knees” over his sexually-forward behavior.

Youthful voters clearly don’t believe he can “deliver the goods.” (7 of Pentacles reversed)

Mature voters think he has lost his mojo, if he ever had it in the first place. (Ace of Wands reversed)

The quintessence card is the Emperor reversed. He appears to have an unjustifiably inflated opinion of himself that doesn’t square with the reality of his situation. I’m thinking “The Man Who Would Be King.”

In the “Policy Quotient” quint line, the Hierophant reversed in the “Blue Collar Cred” position indicates that rank-and-file workers would have no patience with a “Father knows best” approach to labor policy.

The Fool reversed in the “White Collar Cred” position shows that the professional demographic sees his candidacy as a “Fool’s Quest.”

Foreign governments would most likely consider him an innocuous non-entity, basically a placeholder for the next “real” Liberal President. (4 of Swords)

Wall Street would probably embrace his “Washington insider” status, seeing him as at least nominally “one of their own.” (4 of Wands)

The Empress as the quint card makes me think he will rest on his laurels for too long before realizing that he comes across as out-of-touch.

In the “Moral Quotient” quint line, the Sun in the first position implies that religious authorities would have no problem with his moral peccadilloes (they have bigger fish of their own to fry). Some minor hand-wringing and a “tsk, tsk” or two is probably all we will hear from them.

Public opinion (at least before his current embarrassments) seemed to peg him as a nice guy who won’t rock the boat. (9 of Pentacles)

I have a feeling that the media network big-wigs are starting to distance themselves from him. (King of Cups reversed)

Temperance as the quint card seems a bit lukewarm for someone who wants to impress with his lofty credentials as a former Vice President.

The Grand Quintessence is Death, and I can’t resist the metaphor that his unwanted advances on women will spell the “kiss of death” for his candidacy. The phrase “not a chance in Hell” also springs to mind.