As I see it, one of the goals of affirmation is to lighten our psychological load, shifting our attention away from the drag of burdensome past misfortunes and freeing us to take wing toward a brighter future, like a butterfly to a blossom. I think of it as “fortified wish-fulfillment.” For years my wife had a post-it note on our refrigerator that said “We pay our bills with ease and always have plenty of money.” During the years when I flirted regularly with a six-figure annual income, this was more-or-less a self-fulfilling prophecy, but it also focused us on the ever-looming threat of its alternative, to the point that  we tightened our spending habits in preparation for the coming financial melt-down (aka “retirement”). The upshot is that the fond “wish”  is still a plausible  approximation of reality.

In his discussion of the Death card, Aleister Crowley made some useful distinctions between the card’s three alchemical avatars: the ground-hugging Scorpion, unable to rise above its station; the aspiring Serpent, a symbol of “male energy” promising the consummation of one’s desires; and the soaring Eagle, representing “exaltation above solid matter.” The affirmative tag given this card is “transformation,” a lofty target to be sure, but the process of getting there can be much more gritty, with some kind of actual or figurative “death” lurking in the wings. However, it offers a good all-in-one snap-shot of what I’m talking about.

Unalloyed affirmation  certainly seems to be the aim of tarot when used solely for “self-empowerment,” with no taint of “fortune-telling” to sully its pure essence (repeat after me: “There are no bad cards . . .”). But not all denizens of our psychic closets are so easily rooted out and banished. Some are like anchors, millstones or albatrosses around our necks that we haul around from one encounter to the next, forever lagging in our attempts to make headway in our personal agenda. Part of the problem is that it may not be a simple matter to sniff out exactly what is eating at us. An old saying goes “Some days you eat the bear, some days the bear eats you.” It isn’t always easy to tell at the start of the day who has the upper hand. Here we will take out our “steely knives” (errr, dice) to see if we can skewer the beast and hopefully remove its choppers from our backside.

This spread uses two columns of “hidden” cards that are selectively revealed through the act of rolling a single die to choose a face-down card from the pairs in “Column A” (odd-numbered) and “Column B” (even numbered). The selected card in each case is turned face-up and placed in order, left-to-right, in the top row of the reading series. These four cards are read as  the path we must take to free ourselves of past encumbrances. Each unrevealed card of a pair is placed beneath its mate, still face-down, and represents what is weighing us down or holding us back. These card are then turned up and read as the “baggage” that we must acknowledge and take ownership of in order to advance. Achieving this recognition can be more than half the battle. Note that this spread should be usable with any deck, tarot or oracle. 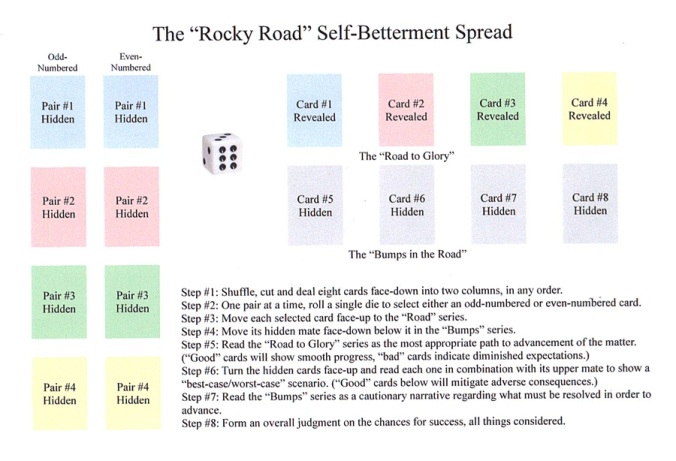