I know a woman who is forever agonizing over how to get a better job but is somehow never able to “pull the trigger” on actually getting one. Something always seems to stand in her way. I saw this as a perfect opportunity to test my “Rocky Road” Self-Betterment spread. I used the Gilded Reverie Lenormand instead of a tarot deck. All of the cards were drawn randomly but, frankly, I could not have chosen better ones for the purpose of illustrating this situation if I had picked them intentionally. They speak plainly and accurately to both her best course of action and her apparently insurmountable difficulty in following it. Here are photos of the series of steps in the order they were performed. 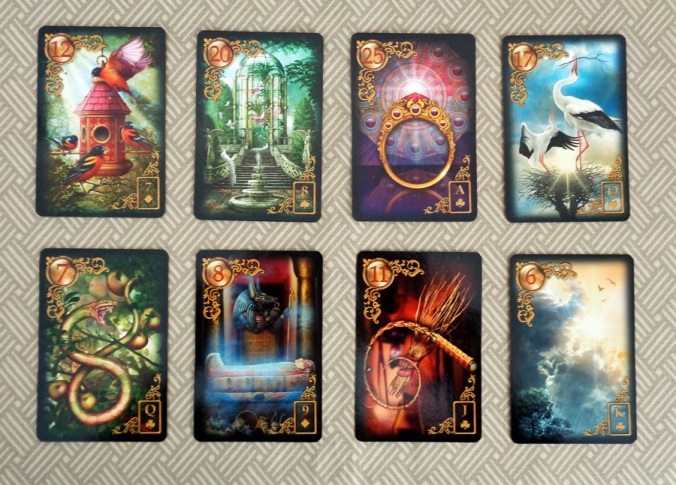 The road to self-realization (top row) is populated with cards that tell a very clear story: if she promotes herself and gets a “buzz” going (Birds), then puts herself “out there” (Park), she will make a connection (Ring) that will take her to a better place (Storks). There are no negative aspects to this series except perhaps the nervous stress (Birds) she might experience doing something that goes entirely against her self-effacing nature.

The  “road-block” scenario (bottom row) shows that she has the “mother” of all inferiority complexes, which manifests as self-defeating behavior at every turn. She whispers lies to herself (Snake-Birds), closes herself off from society (Coffin-Park), argues herself out of every promising opportunity (Whip-Ring) and is totally confused about ways to successfully move beyond this impasse (Clouds-Storks). There are no positive cards in this series to mitigate the gloom.

She definitely needs a “can-opener” to get her out of her self-created shell. Although I don’t normally use the quintessence technique with Lenormand (although it isn’t unknown in the French cartomantic tradition), I decided to turn each pair into a “quint” to see what that might tell me.

This woman currently works for a university system (High Tower), and the quint cards are suggesting that there may be a male administrator within the system (High Tower-Man) who can help her diminish the burden of discouragement she is carrying (Cross-Mice), allowing her a glimmer of hope. It’s not much but it’s better than no hope at all.