I’ve always found the typical three-card draw to be rather uninspiring. My long-held opinion is that the reader has to inject entirely too much intuitive guesswork into the gaps between the cards to make a compelling narrative out of the sequence. A five-position spread is the minimum I prefer to work with in order to “just read the cards.” However, over the years I’ve made several attempts to “spice up” the three-card pull in different ways, often with optional cards that are brought into the mix through various means. This is my latest attempt, using dice as a “multiple choice” selector. 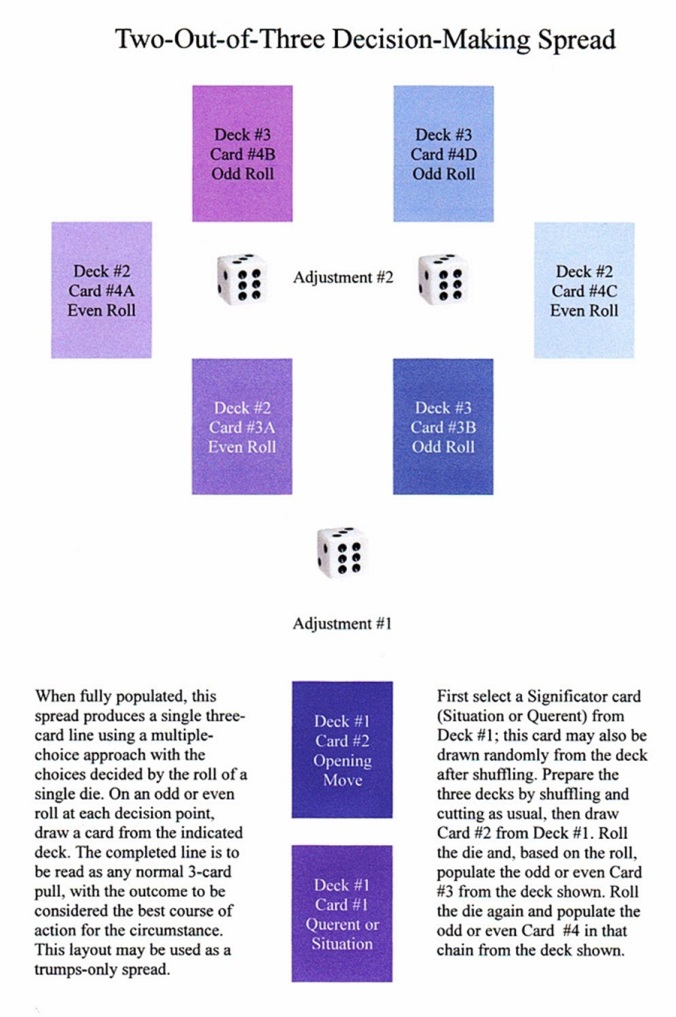 On the face of it, this looks like a 7-card layout plus Significator. But only three of the seven play an active role in the reading. There are either/or options midway through  each chain that are triggered by the roll of a single die. It uses three decks, two of which participate in the alternate paths. The “Opening Move” or first step in each decision tree always comes from Deck #2. The possible even-and-odd permutations of cards from these decks are as follows. Only the first line represents a “normal” flow of events; the others suggest a mid-course adjustment of some kind.

Generally speaking, in keeping with esoteric number theory the odd-numbered pulls signify active change in the wind and the even-numbered pulls a tendency to “stand pat.” I toyed with the idea of making the odd-numbered pulls from the bottom of Deck #3 but decided against it in the interest of simplicity. You can try that if the idea moves you. Although the possibility is fairly remote with 234 cards in play, there is a chance of pulling identical cards for different positions when more than one deck is used. If, for example, you are nervous about turning up Death three times, the Significator should be pre-selected and not randomly drawn, reducing the risk by one-third. In my opinion, a double instance of the same card is still a powerful reinforcement of that card’s message and warrants close attention.

Although I didn’t explore it in the spread guidance, it is also possible to factor in the esoteric interpretation of the six numbers represented by the “spots” on the die, effectively turning the three-card storyline into a five-part narrative. Here is my take on the meanings I would ascribe to the “passages” between cards signified by the die roll. Note that, since this came from an earlier spread, I’ve included all twelve numbers that can come up when using two dice, but only the first six are relevant to the layout presented here.

These meanings come primarily from the Tree of Life by way of Aleister Crowley, with minor input from Agrippa’s “Three Books of Occult Philosophy.” They aren’t related to the “lucky number” form of pop numerology.