As I’ve mentioned before, we are trying to sell our home and move closer to our son’s family to help with childcare logistics. At the moment we have two “live ones . . . ” (I mean “potential buyers) who have come our way expressing an interest in the house. In trying to judge which one might have the lead in coming to terms, I realized that I don’t have a spread specifically to compare the credibility of one candidate over another (or others). So I created this spread using the criteria of Enthusiasm (how eagerly each competitor anticipates the opportunity); Readiness (how prepared they are to make a move); Level of Commitment (how actively engaged and serious they are about dealing) and “Best Shot,” a roll-up of the first three cards using the quintessence calculation to show which one is best situated to commit. This spread uses reversal to express variables such as level of interest or disinterest and intention to manipulate or “finesse” the bidding process. It can be used in any situation where competition for something is present. 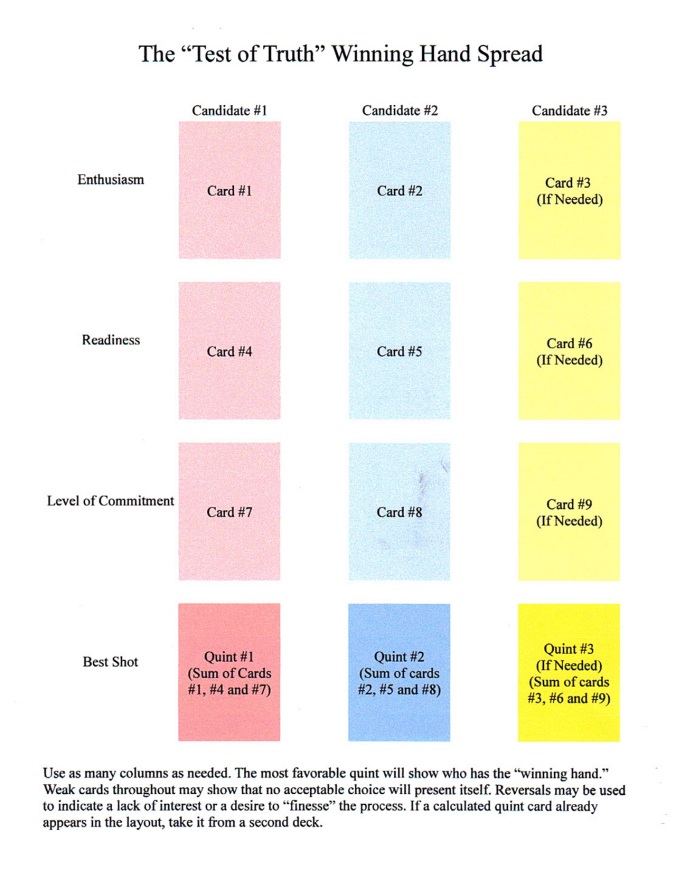 I performed the spread as a test case using the “house sale” scenario. The candidate in Column #1 was the first one to arrive for a viewing; the Column #2 party came later the same day. However, this selection was somewhat arbitrary, and the reading may show that one candidate is favored over another without specifically identifying which one it is. I learned this from the example reading below.

Candidate #1 shows a much higher level of enthusiasm; Candidate #2 seems to be comfortable with the status quo and only casually looking for a change – “testing the waters” but not really spurred to action.

Candidate #1 has been anticipating the chance and was just waiting for the right opportunity; Candidate #2 very likely has other “irons in the fire” and is merely keeping options open.

Candidate #1 is “fence-sitting” a bit and may waffle when it comes to getting serious about the money, but it looks like Candidate #2 is simply unwilling to be pinned down.

Candidate #1 is playing things close to the vest and may try to be coy about just how interested he is; it looks like a negotiating ploy is forthcoming. Candidate #2 may be completely uninterested in budging on key points of sale; “stiff-necked” is the word that comes to mind.

A word about the quintessence calculation: since I use reversals, I’ve adopted the practice of subtracting the value of reversed cards in order to be able to arrive at the Fool as a result, which is not possible via simple addition and reduction unless the Fool is renumbered as 22. A related advantage is the chance to arrive at a negative (reversed) quint card, with all the subtlety that implies. Also, rather than excluding the unnumbered court cards from the calculation, I consider them to represent #11 (Page) through #14 (King).

I would normally say that Candidate #1 in this reading reflects the first viewer, who would be in the best position to move forward. However, the second viewer asked some probing questions through the realtor and may be in hotter pursuit. In that case, my original assumption regarding identity should probably be swapped, with Candidate #1 being the second viewer. Time will tell.