This is a test reading for the developmental insight spread I just posted this morning. The scenario addresses our ongoing initiative to sell our current residence; if you’ve been following this blog you will have seen previous posts on the subject. I used the Tabula Mundi Colores Arcus deck, with reversals. 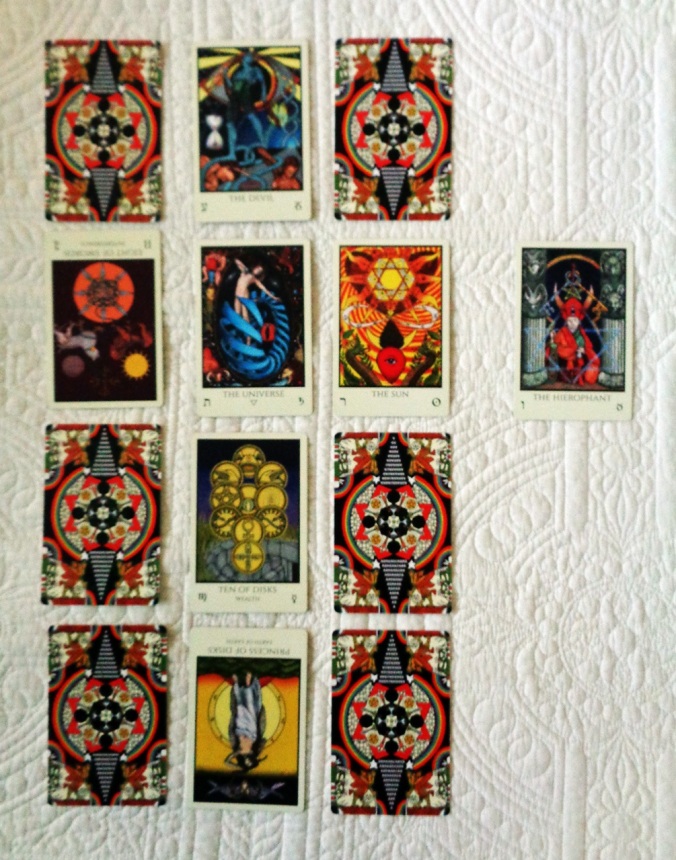 The “index” card is the Universe in the “Improving Trend” row. The Universe is generally considered a card of completion and satisfaction, but as a Saturn card I also see it as requiring more than a little patience to get there. Fortunately, it has considerable help from the Sun to its right. The 8 of Swords reversed to the left shows that the way forward is presently unclear; we’re thinking that the outlook may not clarify until Mercury goes direct in the middle of August (all of the Eights have a Mercury correspondence on the Tree of Life, and the reversal here has it “tied up”).

Elementally, the 8 of Swords is hostile to the Universe but the Sun is neutral and supportive to it in a most constructive way, beside being one of the most positive cards in the deck. Air (8 of Swords) and Fire (Sun) are highly compatible with one another, and the Sun is in the driver’s seat here, emphatically offsetting any anxiety caused by the minor Air-Earth dissonance. August is a period of intense sunlight and the Sun is the ruler of Leo, so my guess is that August will bring success.

The Hierophant as the quint card (note that I subtract the value of reversed cards) suggests that a conventionally well-established individual with the resources to meet our asking price for the property will come forward, although there may be some dickering over the basic functionality of a couple of its core features. The Hierophant corresponds to Taurus, and there is a good deal of land on the table that should appeal to the acquisitive nature of Venus, its ruler. As an expression of Earth, the Hierophant is nicely attuned to the Universe, which some see as doing double duty for the element of Primal Earth that is missing from the qabalistic triumvirate of the Fool (Primal Air), the Hanged Man (Primal Water) and Judgement (Primal Fire).

The advice here is “Be patient” (Universe) and “Play by the rules” (Hierophant), and there is every reason to expect a materially satisfying outcome.  Overall, I would say that our prospects are encouraging.