Tarot is a boon companion to those cartomancy fans (or “fiends”) who are unable to sleep through the night. Some get up and play with their cards until fatigue overtakes them. I dream up (in a semi-lucid fashion) new ideas for this blog; sometimes I get up and type feverishly before they escape me and then go back to bed, since intervening slumber (when I can manage it) usually wipes my memory banks clean. Not this time, though; this one popped up around 4:30 AM so I just got up and started the coffee.

The country-rock band Poco once wrote a beautiful song titled “In the Heart of the Night.” At 2:00 AM my sleep-averse brain is having none of that. I tend to get the “armpit of night” or other unsavory bits. I’ve been thinking for some time about the “nightmare card,” the 9 of Swords, in this context. My favorite version is from the Victorian Romantic deck, which shows a young woman in a nightgown apparently sleepwalking along the edge of a steep, tiled roof, oblivious to the danger of falling; she even had the unconscious presence of mind to hike up her hem. This is a much more meditative image than the bedeviled woman in the Waite-Smith card, which fairly bristles with anxiety. The Victorian Romantic  fulfills Joseph Maxwell’s vision (although he was talking about the Marseille deck): “There is a richness and fullness about the 9 of Swords which does not preclude the aspect of suffering and trial.” (He seems to be implying “It hurts, but in a good way,” and could be alluding to a more evolved expression of the “no pain, no gain” idea behind the 3 of Swords, since the numbers Three, Six and Nine comprise the ancient Greeks’ “Three Perfections.”) Rachel Pollack recently observed that in the RWS deck, the 9 of Swords and the Devil are the only cards with a totally black background; many writers have characterized it as “the dark night of the soul” from the untitled poem by Spanish mystic St. John of the Cross, itself inspired by the works of 6th-Century theologian and philosopher Pseudo-Dyonisius the Areopagite. (Isn’t coffee marvelous?)

“In an obscure night
Fevered with love’s anxiety
(O hapless, happy plight!)
I went, none seeing me
Forth from my house, where all things quiet be” 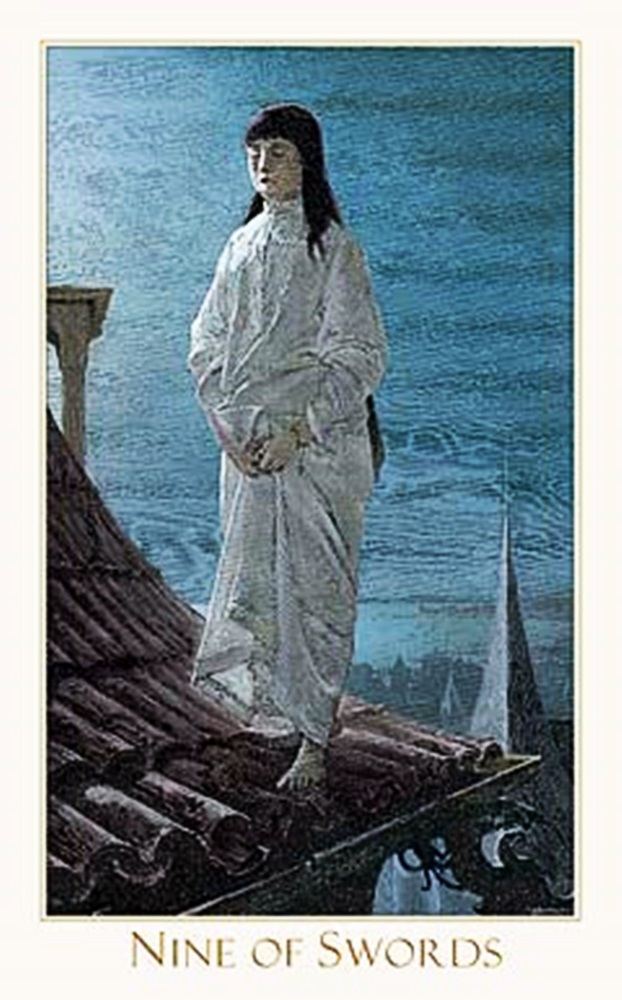 This card alone would be enough to convince me to buy this deck, if only it were a little less pricey. But it has many even more sumptuous delights awaiting the lucky owner. Maybe someday . . .