This reading was performed on a hypothetical romantic relationship by applying my “Relationship Crisis Spread.” I used the Thoth deck, with reversals; this spread does not require a Significator card. I also calculated the two optional “quintessence” cards to show how that is intended to work.

The relationship in question was between a man and a woman, with the man as the querent. The details of the  situation are unimportant. It was pure serendipity that all of the cards in the spread were “small” cards except the Advice card, which was the Knight of Cups. I couldn’t have come up with a better array to test this spread if I had hand-picked the cards. This display suggests that petty but persistent squabbling was at the heart of their difficulties. It reminds me of the old newspaper comic-strip, “The Bickersons.” 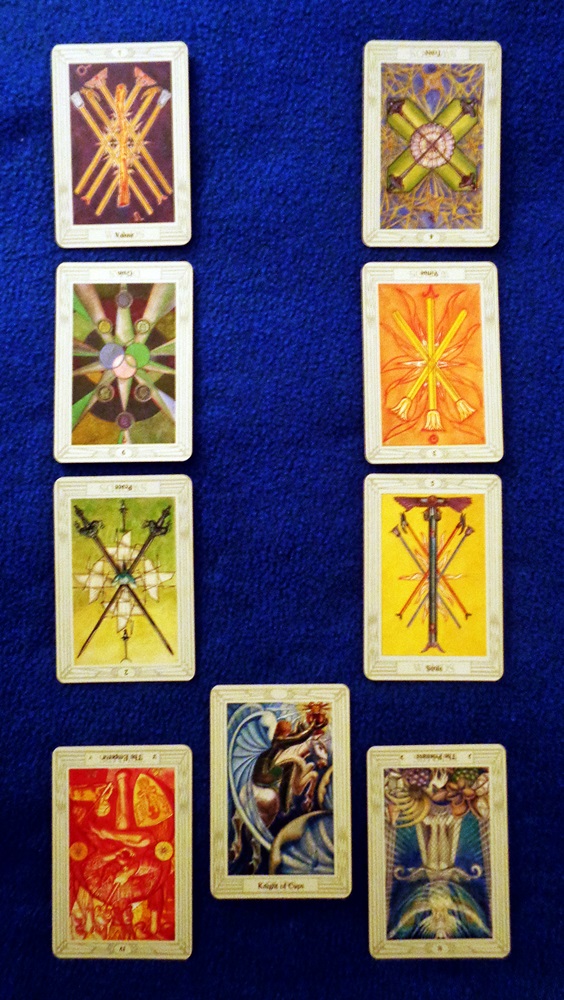 The “plus” card in the “Go” chain was the 7 of Wands, titled “Valour.” The suggestion here seems to be that the ongoing battle would probably just enter a new phase if they decide to go their separate ways, with both of them feeling that they’re holding the moral “high ground.” It doesn’t spell “relief” to me. The “plus” card in the “Stay” chain was the 4 of Swords reversed, titled “Truce.” The better option would appear to be to “bury the hatchet,” but unresolved animosities would most likely still simmer beneath the surface.

The “mixed” card in the “Go” chain was the 9 of Disks reversed. No mystery here; she would probably take him to the cleaners financially if they split. In the “Stay” chain we have the 3 of Wands reversed, titled Virtue;” the implication is that they would have to swallow their pride and “play nice” if this is to work out.

The “minus” card in the “Go” chain was the 2 of Swords reversed, titled “Peace.” It conveys the biblical idea of “no peace for the wicked” (Isaiah 57). Their argumentative natures would be enough of a goad to drive them further apart, with no rapprochement in sight. It looks like a “burr under the saddle” to me. The “minus” card in the “Stay” chain was the 5 of Wands, titled “Strife.” Again, no mystery; they can expect a steady diet of “same old, same old” if they decide to stick it out.

The Knight of Cups as the Advice card is the perfect capstone for this reading. it shows that the man doesn’t really have the resolve to leave the relationship, and would prefer to just drift with the current. It is the tarot equivalent of “Whatever . . . I need a drink!”

The “quint” card in the “Go” chain was the Emperor reversed, implying some serious legal complications if they choose to separate. The judge would most likely not go easy on either of them. Think “Judge Judy” in pants. The “quint” card in the “Stay” chain was the Priestess reversed, showing that “the rest of the story” has yet to be told. The Knight of Cups is facing toward the Priestess and as a fellow Water card would seem to have more sympathy for her placid, contemplative ways. Overall, I’m thinking the man will “wimp out” on doing anything aggressive and simply bow to the inevitable. He needs to cozy up to that inscrutable Priestess, count his blessings and buckle up for the long haul. If he has a tendency toward alcoholism, that might unfortunately be his escape. I would bring that risk to his attention and suggest a more exalted (perhaps spiritual) path.