Let’s get the unpleasant stuff out of the way first. While Cathy McClelland’s artwork is a wonder to behold, the manufacturing quality of the deck is rather poor. I had to order the Star Tarot from Amazon twice and both times some cards had damaged backs. Many had rolled sections or shallow nicks on the edges where it appears the cutting die had “punched through” instead of cutting cleanly, leaving a slight raggedness and a few chips in the laminated surface. The backs are a uniform dark blue except in the center, and the high-gloss lamination makes any defects stand out starkly. Some of the chips are placed such that the cards are effectively “marked” (I can already identify the 9 of Cups, the Queen of Wands and the Sun just from glancing at the backs), which makes reversibility pointless. While it’s true that the rolled edges can be smoothed out a bit between thumb and forefinger, short of trimming off the borders or sending the deck back to the seller, there’s nothing that can be done about the chips (although I may try a little clear lacquer to keep the damaged areas from getting worse). The shoddy cosmetic quality of this otherwise exquisite deck is disappointing. I probably should have waited for a future printing.  On the plus side, the faces are all unblemished and the companion book is a respectable 216 pages; it appears to follow the Golden Dawn/Thoth system of correspondences.

Here is a picture of what I’m talking about. 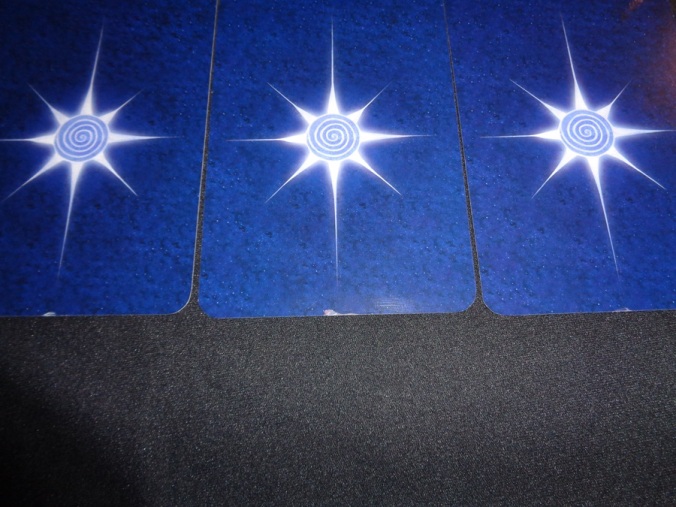 Anyway, on to the the reading. I performed my “personality profile” deck interview spread as soon as I received it. 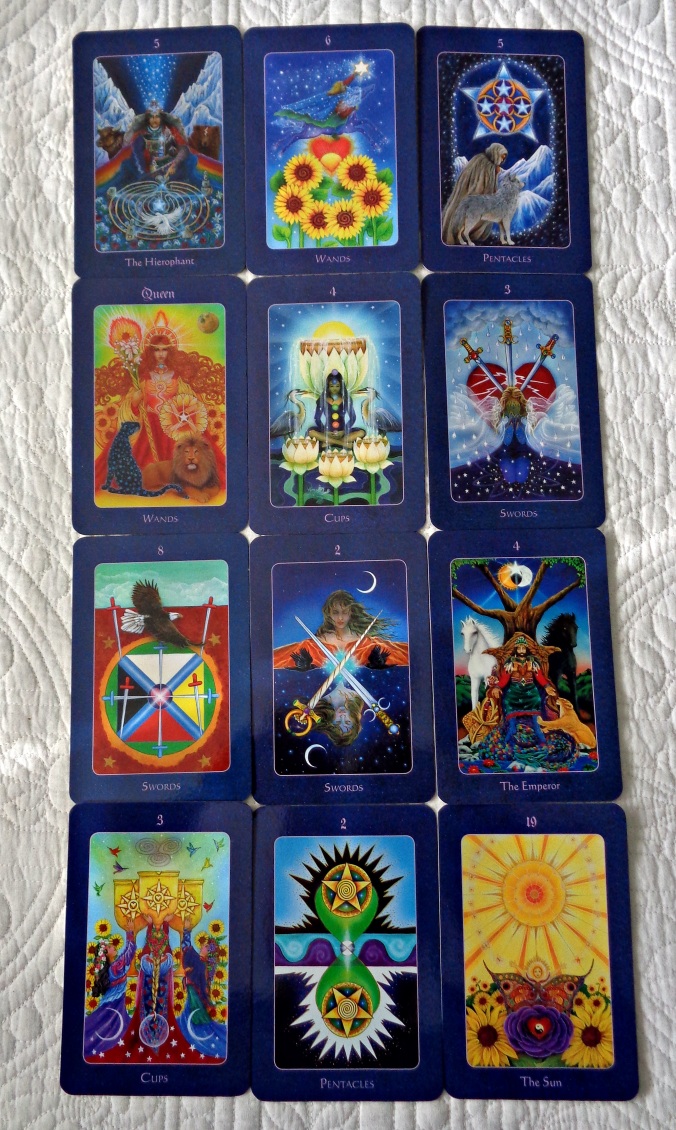 The Hierophant in the “Wands” position suggests that the deck is methodical and earnest, a long-distance runner rather than a sprinter. It should have good “legs,” although it may not dazzle with its insights. The Queen of Wands in the “Cups” position is a bit more uplifting in its emotional quotient. bringing a sheen of glamor to the deck’s dramatic presentation. The 8 of Swords in the “Swords” position imparts a measure of ambivalence and indecisiveness to the deck’s testimony. The 3 of Cups in the “Pentacles” position brings a light touch to the weightiest of pronouncements. On the strengths of the Queen of Wands and the 3 of Cups, this deck will probably be a crowd-pleaser and a “first choice” among sitter; any difficulties with it will be on the reader’s side.

The center column shows the deck’s usual “manner of speech” and “conversational tone.” The vertical sequence is the same as before. All of the cards in this column are even-numbered, bringing a sense of poise and equanimity to the table. It should be a breeze to “converse” with.

The 6 of Wands in the Wands position implies that the deck will be a voluble and engaging communicator, never at a loss for words. The 4 of Cups in the “Cups” position tempers that glibness with a wash of contemplative silence, not so much inarticulate as judicious in its choice of words. The 2 of Swords in the “Swords” position is also reflective in its deliberations and not prone to speak out of turn, offering quiet “words to the wise” rather than idle chatter. The 2 of Pentacles in the “Pentacles” position is an able “juggler” of mundane facts and figures, such that the deck should never be caught napping in practical situations. In summary, it looks like that this deck will meet the reader more than half-way in deploying its narrative utility.

The right-hand column displays something of the deck’s overall nature; the cards are read in combination with the middle set to provide a more ample description of the deck’s potential. The vertical sequence is again identical.

The 5 of Pentacles in the “Wands” position places sobering drag on the exuberance of the 6 of Wands. It mirrors the “Five-ness” of the Hierophant, adding its Mercury-in-Taurus scrupulousness to the stolidity and caution of the Taurean trump card. This deck would seem to perform best in less casual or frivolous reading scenarios, since it wants “just the facts,” with no fanciful embellishments and no flighty suppositions. The 3 of Swords in the “Cups” position punctures the taciturn aloofness of the 4 of Cups, and not in a good way: harmful gossip is one less savory meaning of this card, especially alarming in a medium that is used for counseling and empowerment. Care will be needed to avoid doing more psychological harm than good with this deck. The Emperor in the “Swords” position has a very firm grip on this particular implement of authority; it takes the well-honed wisdom of the 2 of Swords with good grace and puts it into motion in a steadfast and even-handed way. “Trustworthiness” is the signature quality of this deck in its unstinting dispensation of honest and truthful testimony. The Sun in the “Pentacles” position has a certain daunting pitilessness to it; nothing can hide from its unwavering glare, no matter how cleverly the 2 of Pentacles tries to “cook the books.” While this is generally a good thing, not every querent will find its penetrating gaze endearing.  The energetic “one-two punch” of the Emperor with its purposeful Arian dynamism and the Sun with its all-seeing Solar perceptiveness would make this a good deck for business counseling.