The “action” card for today is the Universe reversed. 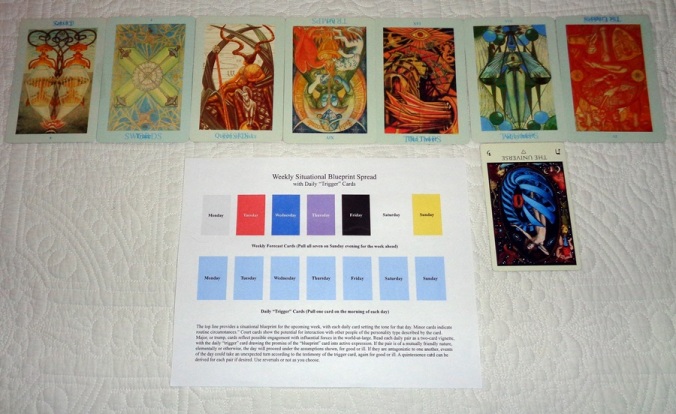 The first thing that crossed my mind on seeing this card was “unfinished business” related to the Tower I pulled yesterday. The second thing was the old chestnut “waiting for the other show to drop.” Another pertinent thought  is “what goes around, comes around.” I performed a Lenormand Grand Tableau last night about the collapsed friendship, and it was obvious there would be more e-mail communication from the other party aimed at reconciliation (Letter + Heart). It was also abundantly clear that this initiative would go nowhere, since Heart was in the house of Cross at the very end of the spread.  The Universe reversed strikes me as reinforcement of that stalled scenario. The Universe is often seen as a “success” card, but here its related  meaning of “completion” (as in closing a chapter) seems more appropriate.  It also corresponds to Saturn, which is slow to evolve, and with the reversal it may be glacially slow to the point of immobility. The outcome is stalemate (or more precisely, checkmate) and the advice is “don’t hold your breath.”

The “background” card for today, Adjustment, implies the need to manage the situation in an equitable but resolute fashion without caving in to appeals for reconsideration.  One interpretation that Eden Gray gives for the Universe reversed is “Refusal to learn the lessons of life,” which was one of the key contributors to  failure of the relationship. Both the World and Adjustment have a connection to Saturn, the Universe directly and Adjustment through its correspondence to Libra, which is the sign of Saturn’s exaltation. Saturn has been called “the Great Teacher” and “the Taskmaster,” and its double emphasis here is instructive. Lessons are being learned on both  sides of the equation.

Adjustment, traditionally called Justice, is the card of “just desserts.” Recent developments were an eye-opener that led to a powerful urge to pursue Saturnian self-preservation by severing ties (Mars as the Tower). “Stone-walling” is also a signature move in Saturn’s playbook. Another fascinating parallel is that in the Lenormand system, one meaning of the High Tower is isolation, and that card sat directly above the Significator in my Grand Tableau; withdrawal was the querent’s immediate priority.